US President Donald Trump praised the police for finding and arresting the suspect in a series of suspicious packages sent to prominent Democrats, saying that political violence has no place in America.

“I am pleased to inform you that law enforcement has apprehended the suspect and taken him into custody,” Trump told the Young Black Leadership Summit at the White House on Friday, to cheers of approval.

“These terrorizing acts are despicable and have no place in our country,” he said. “We must never allow political violence to take root in America. I’m committed to do everything in my power as president to stop it, and to stop it now.”

I would like to begin today’s remarks by providing an update on the packages and devices that have been mailed to high-profile figures throughout our Country, and a media org. I am pleased to inform you that law enforcement has apprehended the suspect and taken him into custody. pic.twitter.com/UFjwjjUkLd

Trump praised the law enforcement for identifying and detaining the suspect quickly, before moving on to say that someone in the audience of “brilliant, courageous, patriotic and proud Americans” will be in his place someday. 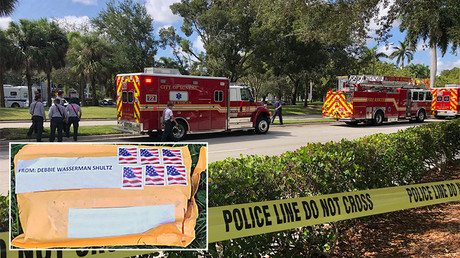 “Americans must unify,” Trump added. “And we must show the world that we’re united together in peace and love and harmony as fellow American citizens. There is no country like our country. And every day we’re showing the world just how truly great we are.”

Trump also said that he instructed the US authorities to “spare no resource or expense in finding those responsible and bringing them to swift and certain justice.”

Over the past week, what appeared to be small pipe bombs were sent to CNN, billionaire George Soros, and a list of prominent Democrats ranging from former Presidents Bill Clinton and Barack Obama to former Vice-President Joe Biden, former spymasters John Brennan and James Clapper, Senator Cory Booker (D-New Jersey), Rep. Maxine Waters (D-California) and actor Robert De Niro. The return address on all packages was of Congresswoman Debbie Wasserman Schultz (D-Florida). A package addressed to former Attorney General Eric Holder bounced and ended up returned to Schultz’s office. None of the devices detonated.

Mainstream media blamed Trump’s “hateful rhetoric” for the packages and even speculated it might have been a “Russian operation,” while the #Resistance activists dubbed the unknown perpetrator the “MAGAbomber.”

Identified by media as Cesar Sayoc of Aventura, Florida, the suspect was arrested on Friday. His age was given as either 54 or 56. Photos of a white van allegedly belonging to Sayoc show it covered with stickers supporting Trump and denigrating Democrats and the media.

Earlier on Friday, Trump took to Twitter to complain that “this ‘Bomb’ stuff” is hurting his party’s chances in the upcoming midterm elections. After Republicans got off to an impressive start in early voting, Trump claimed that wall-to-wall coverage of the packages had pushed his campaign issues off the table.

Republicans are doing so well in early voting, and at the polls, and now this “Bomb” stuff happens and the momentum greatly slows – news not talking politics. Very unfortunate, what is going on. Republicans, go out and vote!

Before Wednesday, a 7,000-strong caravan of migrants making its way to the US border from Central America dominated the news. Trump had seized on the opportunity to bash Democrats for their failure to back his tough immigration laws , and had explicity said that stopping the caravan would be a “great midterm issue for Republicans.”

The large Republican turnout prompted NBC news to wonder “is the blue wave turning purple?” – a reference to Democrats’ long-held but now shaky belief that a ‘blue wave’ will sweep the party into control of the House and Senate.

Polling and analysis site FiveThirtyEight now gives Democrats a one-in-six chance of retaking the Senate and a six-in-seven chance of taking the House.