British Prime Minister Theresa May is traveling to Brussels for a crunch meeting with EU leaders on Monday despite not yet finding a solution to the Irish border problem. It comes as a cabinet minister conceded for the first time that Brexit might not happen.

May has until Monday night to meet an EU deadline for Britain to make “satisfactory progress” on the issues of the Brexit bill, citizens’ rights and the border in order to trigger trade talks this month.

She will meet with European Commission President Jean-Claude Juncker, with Downing Street saying “plenty of discussions” lie ahead, the BBC reports. The timings of May’s visit marks a deadline set by Donald Tusk, president of the European Council, for her to come forward with an improved offer on the terms of the UK’s withdrawal from the EU.

A Number 10 spokesperson described Monday’s meeting as an “important staging post” on the route to the “crucial” summit with the other 27 leaders in the middle of the month when it hopes trade talks can begin. Tusk has said however that Dublin must be satisfied there will be no return to a “hard border” between Northern Ireland and the Republic after Brexit.

It is understood the divorce bill is on the brink of being sealed. May has largely bowed to EU demands on the UK paying a financial settlement of €40 billion to €60 billion (US$47.5-$71.1 billion) net and the rights of EU citizens in Britain but the final compromises required are politically fraught, the Financial Times reports.

Tusk cancelled a trip to Israel and the Palestinian Territories planned for this week due to a “critical moment” in Brexit negotiations, an EU official said on Monday. He had been due to meet Palestinian Prime Minister Rami Hamdallah in Ramallah and Israeli Prime Minister Benjamin Netanyahu in Jerusalem, Reuters reports.

With no agreement in sight between London, Dublin and Belfast on the border issue, the PM is now likely to ask for a last-minute extension to the Monday deadline. Government sources are highly pessimistic about the prospect of a breakthrough, according to the Telegraph, leaving the entire Brexit timetable in jeopardy. 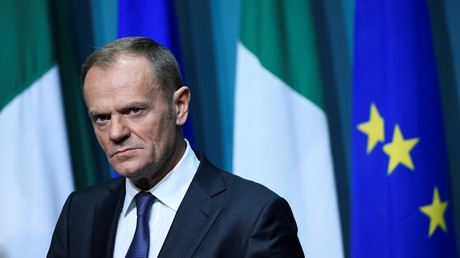 Whitehall sources bitterly complained that Leo Varadkar, the Irish taoiseach (prime minister), had “moved the goalposts” by insisting on guarantees over the future border arrangements now, having earlier said the issue could be thrashed out once trade talks were underway, the newspaper says.

Ireland is holding out for an assurance that it will have “regulatory convergence” with Northern Ireland, effectively meaning the border would move to the Irish Sea.

However, the Democratic Unionist Party (DUP), on which May relies for her Parliamentary majority, says it will not accept anything that is similar to staying in the customs union or the single market. One government source said there was “absolutely no prospect” of ministers going against the DUP’s wishes, adding, “The things that the Irish government wants us to sign up to are things that no British government could sign up to.”

It comes as Health Secretary Jeremy Hunt told Tory rebels if they did not back May in negotiations “we will have no Brexit.” Some backbenchers have hinted that they would vote against a deal that involved paying £40 billion (US$53.8 billion) or more for the Brexit bill or gave the European Court of Justice any powers in British law after Brexit.

Such a scenario would risk ousting May from Downing Street and triggering a general election that could, if Jeremy Corbyn emerged as the victor, result in Labour halting Brexit. Corbyn said over the weekend that he has not yet decided whether Labour would hold a second referendum on Brexit if it won power.

Hunt is the first cabinet minister to raise the prospect that Brexit might not happen.