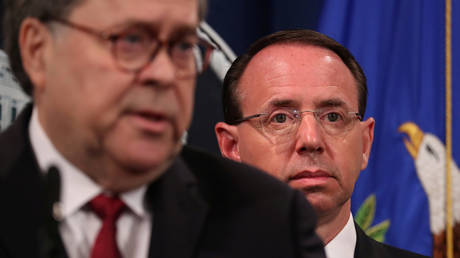 Twitter lit up during Attorney General William Barr’s press conference in advance of the release of a partly-redacted version of the report, with many speculating that Rosenstein’s facial movements — or lack thereof — were providing clues about the contents of the full report.

Some found Rosenstein’s face and insufficient number of blinks “disturbing.”

There are so many things disturbing about what is happening right now, but I can’t shake the fact that Rod Rosenstein hasn’t blinked since the beginning of this press conference. #MuellerThursday

“Blink twice if you are ok Rod Rosenstein,” wrote former State Department spokeswoman Jen Psaki, whose calls were echoed by a former Hillary Clinton aide urging him to “please blink twice if Barr is mischaracterizing the report.”

Blink twice if you are ok Rod Rosenstein

Rosenstein “does not look like man at peace,” NBC reporter Ken Dilanian chimed in, perhaps hoping to do his bit to keep the conspiracy alive.

Rod Rosenstein does not look like a man at peace.

Others were more light-hearted about the whole matter. Washington Post reporter Philip Bump joked that he “did a shot” every time Rosenstein moved a muscle in his face and was still totally sober.

I did a shot each time Rod Rosenstein moved any individual muscle and I’ve never been more sober.

Is it me or does Rod Rosenstein look like he’s being held hostage?