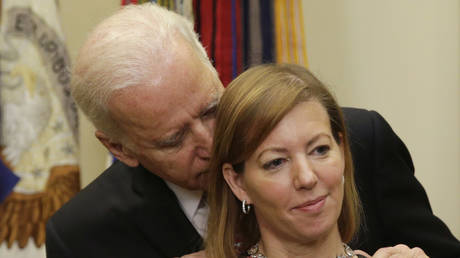 Former VP and likely 2020 candidate Joe Biden has responded to accusations of inappropriate touching of women and girls, saying that his ‘creepy uncle’ demeanor is just the way he is, but vowing to be more respectful in future.

“Social norms are changing,” the 76-year-old former Vice President tweeted. “I understand that, and I’ve heard what these women are saying. Politics to me has always been about making connections, but I will be more mindful about respecting personal space in the future. That’s my responsibility and I will meet it.”

Social norms are changing. I understand that, and I’ve heard what these women are saying. Politics to me has always been about making connections, but I will be more mindful about respecting personal space in the future. That’s my responsibility and I will meet it. pic.twitter.com/Ya2mf5ODts

Videos of Biden inappropriately touching women and children at Washington events have circulated for years, but Biden’s too-close-for-comfort mannerisms were thrust into the headlines in recent days, after multiple women accused him of inappropriate conduct.

Biden was accused last week of unwanted kissing by former Nevada legislator Lucy Flores, who said the former VP planted a “big slow kiss” on the back of her head at a rally in Las Vegas; and this week by Connecticut woman Amy Lappos, who alleges Biden “put his hand around my neck and pulled me in to rub noses with me.”


Two more women came forward with their own stories of “very uncomfortable” encounters with Biden on Tuesday, bringing the total number of accusers to four.

In a video accompanying his tweet, Biden called his lingering hands and head-kisses “gestures of support and encouragement.”

Although Biden has not yet announced a run for the presidency next year, several polls put him in front of a crowded field of Democratic contenders. The accusations against him, however, could hamper any momentum he would have launching a campaign.

Some of Biden’s fellow Democrats have condemned his behavior, with Senator Kamala Harris – herself a 2020 candidate – saying she “believes” his accusers. President Donald Trump mocked the former VP at a Republican event on Tuesday night. Sharing a story about congratulating a general in Iraq, Trump told the crowd “I said, ‘General, give me a kiss.’ I felt like Joe Biden.”


Others have defended uncle Joe. Actress and #MeToo founder Alyssa Milano stepped in to defend what the Washington Post called his “affectionate, physical style,” as did MSNBC’s Mika Brzezinski, who described her “friend” as “extremely affectionate, extremely flirtatious in a completely safe way.”