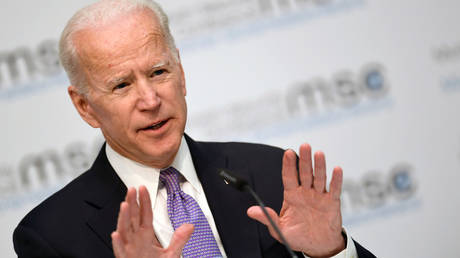 Obama’s VP Joe Biden, mulling whether to run for president in 2020, has made his first public appearance after a number of women accused him of touching them inappropriately. In it, Biden attempted a joke about consent.

On stage at the International Brotherhood of Electrical Workers’ conference in Washington, DC, “creepy uncle Joe” Biden, as he is known among his detractors, hugged the union’s president Lonnie Stephenson.

“I just want you to know I had permission to hug Lonnie,” he said.

“By the way, he gave me permission to touch him,” he said to drive the intended hilarity home later, as he shook hands with some children.

Not everyone found it funny.

Biden walks out on stage in first public appearance since apologizing for inappropriately touching women and says: “I just want you to know I had permission to hug Lonnie” (the president — a man — of the electrical workers group he’s speaking before) – via @cheyennehaslettpic.twitter.com/PZ0VYR6Flx

Biden, who is gearing up to become a Democratic frontrunner in 2020 (though he hasn’t announced he is running yet) is facing accusations of improper touching from seven women who accuse him of touching them improperly. The fact that he chose to joke about touching protocol has raised a few eyebrows on social media.

In his first appearance following allegations of inappropriate touching, former Vice President Joe Biden hugs a young boy and says ” I just want you to know I had permission to hug Lonnie” pic.twitter.com/TKtkH3Mihn

Images of Biden hugging various women and appearing to be sniffing their hair have long been in the public eye, but with the accusations mounting and 2020 on the horizon, he decided to explain it: in a video, he said it’s his way of “connecting with people” and promised to be “more mindful” in the future, now that “social norms have begun to change.”


In an era of #MeToo, when past wrongdoings have brought down multiple celebrities and politicians, playing the ‘times were different’ card was not something some people were prepared to accept.

Joe Biden’s twice joked about his physical behavior toward others and made asking permission for it seem silly. If anyone’s looking for contriteness after the last week, his speech makes clear: Joe Biden is Joe Biden. He’s 76 years old. And love him or hate him, he ain’t changing

After Friday’s address, reporters asked Biden if he thought he owed the women he had touched inappropriately a personal apology, he said he had apologized enough: “I made it clear that if I made anyone feel uncomfortable, I feel badly about that. It was never my intention, ever, ever.”

Biden kicked off his speech at IBEW by ridiculing the allegations (and by extension the women who came forward). He joked he had permission to hug
IBEW’s president, Lonnie Stephenson (a man).

His jokes are a sure sign that Biden understands how wrong his creepiness is, right?