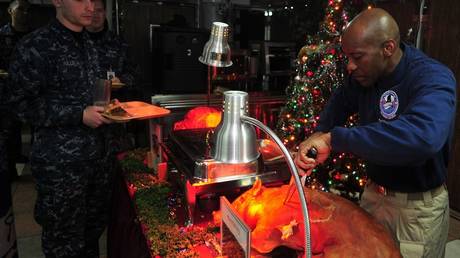 Gluten-sensitive sailors rejoice! The US Navy is dropping the practice of punishing minor infractions with three days in the brig on bread and water rations, as part of an overhaul of military regulations.

Ship captains will no longer be able to send misbehaving crew members to bread and water confinement starting January 1, 2019. The move is part of a reform to the Uniform Code of Military Justice (UCMJ), which President Barack Obama signed into law in late 2016 and President Donald Trump amended earlier this year, according to the military newspaper Stars & Stripes.

Offenses that might earn sailors three days with just bread and water are unauthorized absences, insubordination and lewd behavior https://t.co/7HfRtHxuN2

The administrative punishment that dates back to the age of sail was applied against sailors in the lowest three pay grades for insubordination, unauthorized absences or lewd behavior.

For example, one sailor aboard the submarine support ship USS Frank Cable was punished in the mid-1980s for running naked through the women’s berthing, Brenda Lettera, the ship’s cook, told Stripes.

“They get to eat as much bread as they want during the time,” Lettera said, explaining she gave the sailor two to three loaves for each meal. “Except for raisin bread. That wasn’t allowed.”

The punishment came into being in 1855, when the US Navy outlawed flogging. It was considered a progressive reform at the time, as the British Royal Navy continued flogging sailors until 1879.


The punishment might be antiquated but is not inhumane, Dave Winkler, a historian with the Naval Historical Foundation in Washington, told Stripes. Sailors at the time saw it as a break from hard work a ship required, while the bread-only diet wasn’t much worse than their standard rations, he said.

A military review panel that recommended eliminating the punishment said it was “confident” that commanders could maintain discipline through other punishments provided by UCMJ’s Article 15, according to the Navy Judge Advocate General’s (JAG) office spokeswoman Patty Babb.

There was no word what captains might use instead of bread and water confinement going forward.