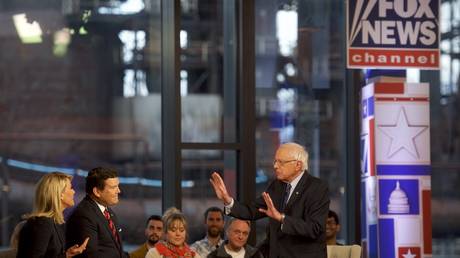 US presidential candidate Bernie Sanders appeared on Fox News for an hour-long town hall special on Monday night — and much to the shock and surprise of Fox and other media, the democratic socialist not only survived, but thrived.

Sanders ventured where his Democratic rivals haven’t yet been brave enough to go — and in the process managed to clobber the Fox hosts on their own turf, while delivering a message that the live studio audience seemed to lap up.

Hosts Bret Baier and Martha MacCallum were likely expecting to dish up an hour of socialism-bashing to Fox’s mainly Trump-supporting audience, but the pair were sorely disappointed when their tactics backfired and inadvertently proved that Sanders’ own brand of populism is indeed very … popular.

Watching this @BernieSanders Fox News townhall. Brett Baier and Martha McCallum have been so deep in Republican propaganda for so long that they no longer know up from down.

I’m so happy Bernie Sanders did a town hall on Fox News. He spread an inclusive left wing message to an audience that is almost always shielded from left ideas https://t.co/mCiANdBRFY

The revelation appeared to come as a surprise not only to the Fox hosts, but to establishment Democrats, who are growing increasingly antsy about Sanders’ momentum and seem unable to accept his popularity. Just one day post-Fox town hall, a new report detailed how Democratic figures were “agonizing” over how to put a stop to his gallop — an odd use of time for a party claiming it desperately wants to beat Donald Trump in 2020.

Calling an emergency meeting of Democrats to grimly announce that we could actually win this time and that we must do everything in our power to stop that from happening pic.twitter.com/exuu2uzIIu

With their first question, Fox hosts tried to needle Sanders on the fact that the success of his book had made him a millionaire last year, but he managed to fight off the attack without much effort. “If anyone thinks that I should apologize for writing a best-selling book, I’m sorry, I’m not going to do it,” he responded, to audience cheers.

“If anyone thinks that I should apologize for writing a best-selling book, I’m sorry, I’m not going to do it.” pic.twitter.com/RZVyJdKIA0

On the question of Medicare-for-all, a key issue for Sanders and a pet hate of Fox News, Baier unwisely decided to poll the audience, asking them if they would be happy to switch their private sector health insurance to a government-run program. The audience instantly whooped and screamed in favor of Sanders’ plan. This shouldn’t have been shocking to the dumbfounded Fox hosts, as polls have shown that a majority of Americans — across the political spectrum — actually like the idea of Medicare-for-all.

Each time the Fox hosts looked for a win, they were left wanting. The politically diverse audience even applauded when Sanders spoke about the “massive amount of waste and overrun” at the Pentagon and the US’ bloated military budget.

Even avid Fox viewer Trump himself weighed in on Twitter, saying it was “so weird” to watch “Crazy Bernie” on the conservative channel and noting the “very strange” fact that the audience was “so smiley and nice” to him. Trump’s reaction led to not-unwarranted suggestions from Sanders fans that the president might be “scared” to see the senator doing so well on his network of choice.

He’s scared of Sanders, no surprise. Like I said, he needs to run against a culture war neoliberal hack Dem to win. Sanders presents problems for Trump. https://t.co/xVGTs5NJyK

Trump is scared. Those Fox supporters were very impressed with Bernie Sanders. He had a plan for Healthcare, Education, Foreign Relations & Immigration. Trump don’t even have an “Idea”.

Some Sanders supporters had voiced concerns about his decision to appear on Fox before the town hall, but the gamble appears to have paid off. Even former Hillary Clinton adviser Peter Daou seemed to be ‘feeling the Bern’, publishing a Twitter thread about how Sanders “can beat Trump” and arguing that the Democrats should stop treating such a popular candidate as the “enemy.”

The thread quickly invited scorn and criticism from Clinton loyalists, but others noted how significant it was for such an “ultra-establishment” operative to be admitting Sanders might be the one to beat Trump.

THREAD: BERNIE SANDERS CAN BEAT TRUMP@BernieSanders is a frontrunner for the Democratic nomination. He has millions of dedicated supporters and is raising tens of millions of dollars.

Few people in politics criticized him more harshly than I did in 2016. But I am a realist…