A book review of A Mirror More Truthful by Prof. Tuhin Sanyal 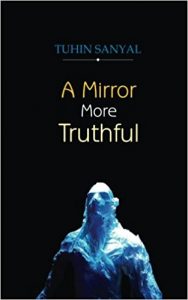 It is not always that you come across a Claude Monet in the world of literature. Prof. Tuhin Sanyal’s A Mirror More Truthful is something I would describe as one without mincing words. A Mirror More Truthful is an apt name for an Indian English poetry anthology, which is unabashedly truthful in the treatment of its chosen subjects. In a world fraught with pretense this piece of literature is as original and candid as it gets and to achieve all this through poetry is a Herculean feat not many will dare to even attempt. I was intrigued by the title of the book when I first laid my hands upon it. I asked myself, “A mirror more truthful than what?” It was after I went through the poems that I got to understand the gold standard with which Sanyal has evaluated the everyday glass and silver mirror we use to see ourselves in. I will come to that gold standard later in this review.

A few lines have stayed with me since the first time I read the book and I will begin by quoting from “Love”:

Dark, dead-ends
Love
The taste of light;
There, walls grope
For refuge.

The treatment of love in literature is as abundant as oxygen in the air. Of course, where would we be as a species without love? But to put love’s desperation in a manner that projects a fettered inmate’s desperation to break free of his shackles and breathe out in the open is a path-breaking treatment of the subject. They don’t come more…