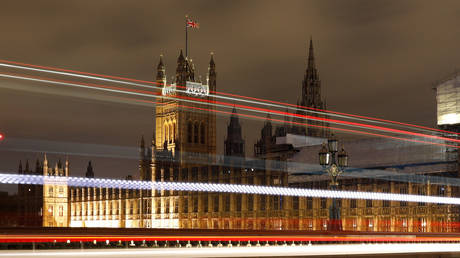 UK parliamentarians have reacted to the news of WikiLeaks whistleblower Julian Assange’s arrest with hearty cheers, as PM Theresa May and her ministers heaped praise on the Ecuadorian govt, for bringing the case to a conclusion.

May delivered a statement on Assange’s arrest to the House of Commons on Thursday, outlining the charges against the 47 year-old Australian, thanking the Metropolitan Police, and claiming the case showed that “in the United Kingdom, no one is above the law.”

May confirmed to Parliament that Assange’s arrest was made for an alleged breach of bail, and following an extradition request from the United States. May also welcomed the co-operation of Ecuador’s new pro-US government in getting Assange evicted after almost seven years in the country’s London embassy.

Foreign Secretary Jeremy Hunt took to Twitter thanking Ecuadorian President Lenin Moreno for his cooperation, insisting Assange “is no hero…he has hidden from the truth for years.”

Julian Assange is no hero and no one is above the law. He has hidden from the truth for years. Thank you Ecuador and President @Lenin Moreno for your cooperation with @foreignoffice to ensure Assange faces justice

Home Secretary Sajid Javid also made a Commons statement on Assange echoing May’s line that no-one was above the law. Javid insited Assange’s legal rights will be protected.

…contrary to what Mr Assange and his supporters claim, he and his legitimate interests will be protected

He also revealed that UK police costs of monitoring the Wikileaks founder totalled £13.2 million ($17.2mn) by 2015.

Assange appeared at Westminster Magistrates court on Thursday afternoon. The judge found him guilty of failing to surrender to bail in 2012. The WikiLeaks founder will be sentenced on May 2.