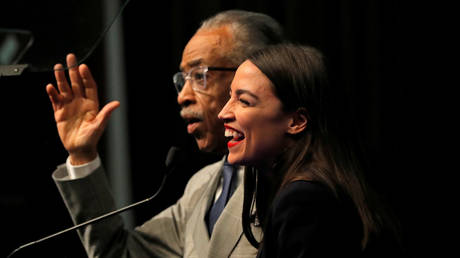 Representative Alexandria Ocasio-Cortez is being accused of faking a southern accent during a speech to a black audience, a transgression that makes her very much like… Hillary Clinton, according to detractors.

Ocasio-Cortez, often referred to as AOC, spoke to the New York civil rights group National Action Network at its convention on Friday. Her speech focused on issues facing the working class, wealth inequality, looming climate-change disaster – things that could be expected from the firebrand social democrat freshman.

However, some people and news outlets took issue with how she said what she said. Specifically, her accent, according to the critics, was a forced imitation of southern twang designed to pander to a predominantly black audience.

Conservative talk show host John Cardillo, for example, said it amounted to wearing a ‘verbal blackface’ – harsh words from a man with a longstanding beef against AOC. During her primary campaign against Joseph Crowley, Cardillo shared a picture of AOC’s childhood home to prove she was not the Bronx working-class girl she said.

Fox News contributor Lawrence Jones seized the opportunity to hit back at AOC for her mocking him earlier this week over wearing what appeared to be a bulletproof vest while reporting from the southern US border. “I wore the vest because CBP told me to but, what’s your excuse for talking like this?!” he tweeted.

The Daily Wire’s Ryan Saavedra said AOC had “pulled a Hillary” with her speech – a reference to Hillary Clinton’s famously fluctuating accent that made her target of attacks from programs like Fox and Friends during her 2016 presidential campaign. He proceeded to pen a story for the outlet, calling Ocasio-Cortez’s response to the criticism “whining.”

So, what was AOC’s explanation? She said it was a Bronx thing, not a “southern accent,” and was no different from how she spoke at other events. “It is so hurtful to see how every aspect of my life is weaponized against me, yet somehow asserted as false at the same time,” she tweeted.

As much as the right wants to distort & deflect, I am from the Bronx. I act & talk like it, *especially* when I’m fired up and especially when I’m home.

It is so hurtful to see how every aspect of my life is weaponized against me, yet somehow asserted as false at the same time.

The critics doubled down, saying she was lying, a racist and used cultural appropriation while accusing others of doing the same. It’s all in the ear of the listener, apparently.