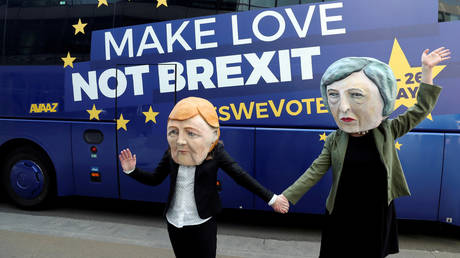 German Chancellor Angela Merkel has delivered a blow to UK PM Theresa May, after insisting a “longer” Brexit extension than the one asked for by the beleaguered Tory leader may be required.

Ahead of an emergency summit in Brussels with EU member states on Wednesday evening to thrash out the terms of any extension to Article 50 for the UK, Merkel claimed May’s June 30 delay date request is likely to be rejected.


The German Chancellor suggested to lawmakers in the Bundestag that the EU may agree to a lengthy delay with the flexibility to allow Britain to leave the bloc earlier if a Brexit deal is signed.

It may well be a longer extension than the one the British prime minister asked for, but we will shape this extension in such a way that whenever Britain has approved the withdrawal agreement, Britain can then complete its orderly withdrawal very shortly after.

Merkel also attempted to quell any talk of taking a divergent position to French President Emmanuel Macron when it comes to the issue of time length of any Brexit delay.

“At this stage, in my view, nothing should be taken for granted,” Macron told reporters upon his arrival in Brussels. “We have to understand why this request is being made, what political project supports it, and what are the clear proposals.”

Macron has pushed for as short an extension as possible, but it’s thought EU national leaders will take their lead from the president of the European Council, Donald Tusk. In a letter to EU leaders on Tuesday, Tusk urged them to adopt a so-called “flextension” to Brexit of one year, mirroring Merkel’s position.

Merkel on possible clashes tonight with Macron over #Brexit extension: ‘I will meet for bilateral talks with the French president to agree a common position. I think tonight’s council will not fail because Germany and France can’t agree with each other. ‘

Merkel revealed that bilateral discussions with her French counterpart will be held ahead of tonight’s summit, to “agree a common position.”

If no extension is granted, the UK risks crashing out of the EU without a deal on Friday.