Imagine a privatized America where rugged individualism reigns supreme within a vast network of corporate America, Inc., similar to 19th century wild west lifestyle, no social security, no Medicare, no Medicaid, no public law enforcement as individuals stand their own ground. Read all about it in Scott Erickson’s The History of the Decline and Fall of America’s Dystopian Future, (Azaria Press, 2018). 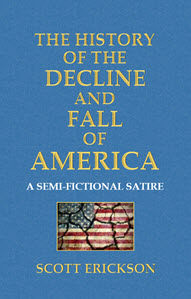 Erickson’s newly released semi-fictional satire of American history and subsequent decline into deepening pits of despair is a sure-fire treasure trove of Americana, at its best. It’s a page-turner par excellence, rich in accurate textured American history and jam-packed with imagery of a dystopian future that is simply unavoidable based upon America’s character and development over the past two centuries. The dye was cast long before onset of dystopian existence.

The History of the Decline and Fall of America highlights and exposes inherent limitations of democratic capitalism whilst explaining in full living color a future American dystopia that is fully expected based upon America’s beginnings from the time of Captain John Smith at historic Jamestown (1607). The history lesson therein is superb, not missing a beat of what shaped America up to the final tipping point of neoliberal dogma and beyond into a deep dark world order.

This beautifully written and…