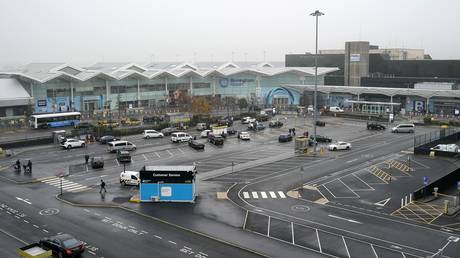 Birmingham Airport briefly suspended all services citing an air traffic control fault, becoming the latest British hub to halt its work in days – and heating up online conspiracy theories in wake of the Gatwick “drone crisis.”

A brief statement issued by the airport said it “had to temporarily suspend services due to an air traffic control fault,” without giving any further details. Passengers were advised to check schedules while the airport ws working “to resolve the issue as soon as possible.”

Luckily for the travellers, the airport managed to promptly resolve the issues, stating that all operations have resumed.

Following the earlier Air Traffic Control technical fault, Birmingham Airport has now resolved the issue and operations have now resumed. We thank passengers for their patience and apologise for any inconvenience this has caused.

The incident follows a string of alleged drone sightings at London’s Gatwick Airport, which were enough to shut it down for over 30 hours this week. Thousands of passengers became stranded or had to rebook their flights.

Not a great few days for UK airports. First a drone at Gatwick, an IT failure at Heathrow, and now a fault with Birmingham’s air traffic control.

Neither the drone nor its pilot have been found by the police so far. Moreover, the latest police comment cited by media said there may not have been any pesky UAV at Gatwick at all.

Also on rt.com
Air traffic out of control: Gatwick caught short by drones over the runway


It is no surprise that the new air traffic disruption at Birmingham in wake of the Gatwick mayhem has evoked a horde of conspiracy theorists and jokers alike trying to ‘explain’ the coincidence.

Some questioned the official explanation given for the traffic suspension– because, of course, the government is hiding “the truth.”

Don’t believe this for one second. My opinion is that there is something far more sinister going on which is being covered up. First Gatwick and the non existent drone, now Birmingham with another lame excuse? https://t.co/tjMe8vfkCX

A few blamed aliens in a solid old-school move.

I’m telling you a drone can’t do this much disruption to two international airports. Now police say that it may not be a drone which disrupted Gatwick. Now this at Birmingham airport. Defo aliens like…. https://t.co/FityIHCWAm

Following UFO sightings near Gartwick last week, further sightings have now been detected in Birmingham. British government have prepared a reception committee in preparation for a touchdown.
Nigel Farage has arrived on scene and has offered to be the intermediary.
🤪 pic.twitter.com/bNt2PMa9hT

But others chose to stay more in vein with the recent trends and laid the blame on “the Russians” instead.

@LouiseMensch is it just me reading too much into this or is the Gatwick drone story and now the Birmingham ATC failure starting to smell a bit Russian?

Of course, things got political pretty quick, with some witty commenters suggesting that the whole air traffic mess had something to do with Brexit.

The Gremlins are out this year, there now happens to be a air traffic control problem at Birmingham Airport, the last couple of days have shown us what a ‘No Deal’ #Brexit will look like, air travel may well be a thing of the passed. Leavers still excited? pic.twitter.com/L2UMRsxjc3

Thankfully there was a lone Christmas conspiracy theory too, but it blamed the striking Santa Claus’ reindeer in a telling sign of our times.

The Reindeer are threatening to strike if Santa doesn’t find a way to stop commercial flights from interrupting their Christmas flight-plan.

Santa’s Intelligence Department is reporting that their intercept test conducted over Birmingham was successful.

Christmas is a go! 🎄 https://t.co/Cz7DMBTgRw