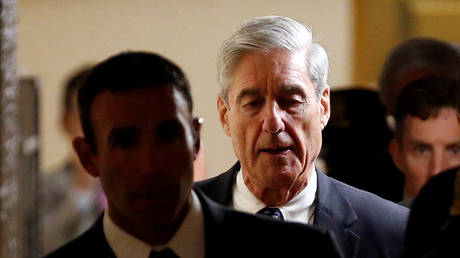 US Attorney General William Barr has “no objection” to Special Counsel Robert Mueller testifying before Congress regarding his investigations into now-disproven “collusion” between the 2016 Trump campaign and Russian officials.

Barr was addressing reporters gathered for a press conference ahead of the release of what is expected to be a “lightly redacted” version over Mueller’s final report.

In response to press questions, AG Barr said he had “no objection” to Robert Mueller testifying before Congress on his investigation and report. pic.twitter.com/GCD2vuCwFS

Also on rt.com
Top Democrats call for Mueller to testify over his report


During his remarks, Barr reaffirmed to reporters that the two-year long investigation concluded that there was “no evidence” that any American — whether part of Trump’s campaign or otherwise — colluded with Russian officials in an attempt to sway the outcome of the election. Barr quoted the report itself and was emphatic about the fact that there was “no collusion” during the campaign.

We cannot take Attorney General Barr’s word for it. We must read the full Mueller report, and the underlying evidence. This is about transparency and ensuring accountability. https://t.co/eNDgQKJHa8

Democrats, however, have been speculating that Barr has spun the report in Trump’s favor and want to hear directly from Mueller. House Judiciary Committee Chairman Jerry Nadler tweeted on Thursday that Congress must hear from Mueller “in person” to “better understand” the findings of the report.

Minutes after Barr wrapped up his press conference, Nadler published a letter asking Mueller to testify no later than May 23.