As the bus was taking our accompaniment delegation to Honduras to the airport for our return home, it stopped by the offices of Radio Progreso. Piling on to the bus came some twenty staff members of the station to bid us goodbye. Each of them greeted us with an embrace, a kiss, or a clasp of hands expressing heartfelt gratitude for our having come to be with them at this dangerous and chaotic time in their country. It was a striking gesture of affection that deeply touched us, the visiting delegates. 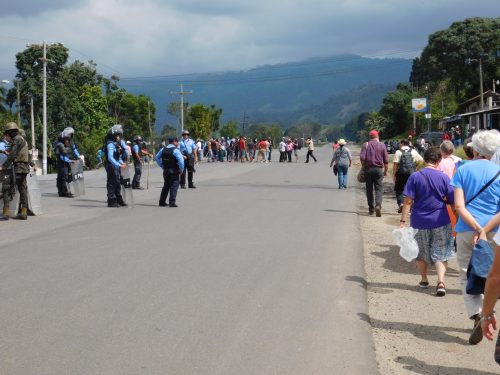 We came to this country at the urgent request of SHARE El Salvador, a humanitarian aid organization with a long history of solidarity work in Central America. Police and military repression in Honduras since the overtly fraudulent elections in November 2017 has been getting worse, with over thirty people killed and more than one thousand in jails. Death threats aimed at those who are raising their voices the loudest are getting more overt and intense.

In particular, the life of Jesuit priest and native Honduran Father Ismael Moreno, known as Padre Melo, is in danger. Possibly as well known as the assassinated Berta Caceres, Melo is the director of Radio Progreso, an independent station that reports on human rights violations, police and military abuses, and the work of dissidents and protectors of the land and waters. A humble and soft-spoken man, he is a spiritual and political leader who has not minced words as he has pointed to the illegal and brutal…