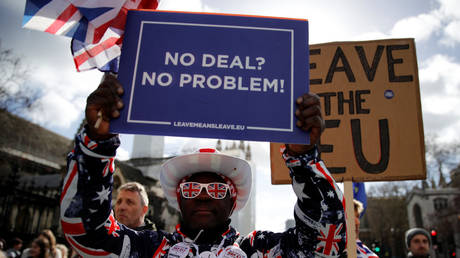 The UK government has stopped no-deal Brexit planning, effectively leaving thousands of civil servants with no clear role. Up to £1.5 billion ($1.96bn) has already been spent on preparing an EU exit without a deal in one year.

Civil servants across the government – around 4,500 in total – who had been seconded to work on imminent no-deal planning, have been told to return to their official duties after Brexit was delayed to October 31.


An e-mail allegedly sent to staff, obtained by Sky News stated: “We have stood down our no-deal operational planning with immediate effect.

“At a meeting…we agreed that the objective is to ensure we wind down our no-deal planning in a careful, considered and orderly way.”

The Department for Transport, headed by under fire minister, Chris Grayling, which handed over £100m ($131mn) worth of no-deal contracts to ferry firms which don’t own any ferries, has claimed the government is “already selling additional capacity back to the market.”

Steve Reed, Labour MP for Croydon North claims the Tories could have avoided squandering such huge sums of money if they had “ruled out” a no-deal Brexit two years ago.

The Tories have wasted £1.5bn on staff for a no-deal Brexit crisis they could have ruled out 2 years ago – every penny cd have gone on schools, police, the NHS, everything else they’ve starved of funding https://t.co/BzF2TrVKTd

Walthamstow Labour MP Stella Creasy took to social media to argue the money could have been spent on funding early intervention youth programmes to stop kids getting involved in knife crime, instead of being recklessly wasted on Grayling’s ferries.

Even just a quarter of that money wasted, a Grayling Ferry’s worth, would have made a massive difference.

This Government spent £4bn on preparing for no deal. £4bn. At the same time its cut the funding for the early intervention youth fund stopping kids getting into knife crime. Even just a quarter of that money wasted, a Grayling Ferry’s worth, would have made a massive difference. https://t.co/pC2JISlWhC

Brexit Minister James Cleverly confirmed the email to civil servants was genuine, but that the government will still be making “necessary preparations” until a Brexit deal is agreed by politicians.