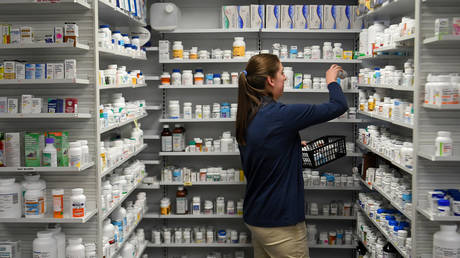 Sixty doctors and other medical professionals across seven US states are facing federal charges for illegal opioid sales, in what prosecutors say is the biggest pill bust in American history.

The doctors gave out more than 350,000 prescriptions for 32 million pills – which could provide a dose of opioids to “every man, woman and child,” in the states of Ohio, Kentucky, Tennessee, Alabama and West Virginia, according to Assistant Attorney General Brian Benczkowski.

The Department of Justice (DOJ) assembled a special team of 300 agents to handle the investigation. This Appalachian Regional Prescription Strike Force started making arrests on Wednesday across eleven states, mostly in rural areas of Appalachia.

Most of the defendants are charged with the unlawful distribution of controlled substances, but the accusations range from handing out pills to Facebook friends to trading drugs for sex. The methods employed differed from doctor to doctor, prosecutors said, but all had the same goal: to provide patients with dangerous and unnecessarily large amounts of narcotics.

The indictments were levied against pharmacists, orthopedic specialists, dentists and podiatrists, as well as general and nurse practitioners.

“This is extreme outlier behavior,” Benczkowski said. “We’re targeting the worst of the worst doctors in these districts.”

Also on rt.com
Opioid overdoses surpass car crashes among leading causes of death in US – report

In another case, a 30-year-old patient suffered a fatal overdose after being given 800 oxycodone pills in just two months. The doctor who prescribed them then directed the patient’s husband to dispose of all pill bottles before police arrived.


DOJ was working with several federal and local agencies to ensure patients who arrive at the shuttered pain clinics get “proper” treatment options, said US Attorney for the Southern District of Ohio, Benjamin Glassman.