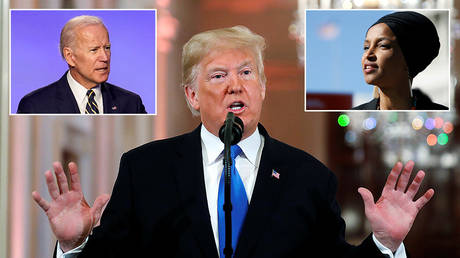 The Democratic Party appears to be ignoring the warning signs along a road that could see Donald Trump celebrate a mathematically unlikely victory next November.

The incumbent remains a divisive candidate, whose low-forties approval rating even in the face of persistently robust economic news and the dampened fire of Mueller report expectations, suggests that it is impossible for the Republican to win handily, if at all. Many will simply never vote for him, and no president this disliked has ever won a second term. But in a divided country with an electoral college, a narrow victory may be all that is needed (or possible) particularly if the Democrats make themselves as polarizing as Trump.

And while the challengers are still in their base-pandering stage of the election cycle, their unfortunate political instincts appear not just a show, but symptoms of a political movement struggling to win over the voters at large. This is what the Democrats shouldn’t do, if they want to get serious about getting back in the White House.

Pick a candidate for the party, not the people

One would assume that in a competitive field of nearly twenty professional politicians that are currently campaigning ahead of the first primary debate in June, there is at least one Bill Clinton or Barack Obama, a charismatic new voice, or at least a non-threatening competent choice to unite the never-Trumpers.

Instead, the bunch seems politically limited, with much internal, but little external appeal – in two broad groups.

Joe Biden, Elizabeth Warren, and even Bernie Sanders – this time around – are there because they are a big name with a campaign apparatus all revved up. Much like Hillary Clinton, they are a known quantity, with limitations that have been exposed (get ready for a year of “Pocahontas” or speculation about where “Uncle Joe’s” hands have been as he makes another verbal gaffe). Perhaps their biggest problem is their literal seniority – all three will be at least 70 by the time the election comes. To challenge a man who has been accused by his opponents of gradually slipping into dementia with even older candidates is egregious strategic logic, however much you feel sorry that they didn’t get their chance last time.

Also on rt.com
American Politburo? Petrified of young blood, US elites would do well to read SOVIET history


The other group fulfills progressive identity criteria. Kamala Harris or Cory Booker may – literally – look like perfect candidates, without ever having convincingly demonstrated why they are. As “I’m with her” amply demonstrated, you can’t just identity politick your way into leading a nation.

The Democrats will hope that by the caucuses starting in February the wheat will emerge glowing from the chaff, as Bill Clinton did in a come-from-behind victory in 1992 – with a Beto O’Rourke, an Amy Klobuchar or even a Pete Buttigieg primed for that role. But notably, both Obama and Trump were already political supernovas 18 months before their wins.

Get caught up in mourning for Mueller

Let it go. Even though some were always provably unhinged conspiracy theories, Russia collusion accusations fuelled base anger for the best part of Trump’s first term. Now, the hangover is here.

Some are suggesting hair-of-the-dog, as the House is leveraged for legal warfare against the sitting president. The Democrats would be advised to pick a new tack here, and a more plausible narrative this time – uncovering genuine lawbreaking on a smaller scale is worth more than a fantastical Kremlin puppet scenario.


And that’s assuming the Republicans don’t go on a legal counter-offensive, with an investigation of their own into why and how the Trump campaign was surveilled in the first place.

Much as they might not admit it, for many Americans these two destroy the illusion that they are voting for a moderate party when they pick the Democrats.

It is not accidental that the president picked Omar, a mere first-term congresswoman with no current plans for higher office, for his 9/11 attack ad in the past week.

Yes, Democrats are duty-bound to defend her, but Trump would love nothing more than to discuss Omar’s views on national security, and Alexandra Ocasio-Cortez economic programs, rather than debating realistic policy with actual 2020 opponents, who are finding their oxygen thieved by the whole sideshow.

Prioritize weakest and most irrelevant issues

Denying Donald Trump the opportunity of turning his landmark policy into a gleaming barrier of steel on the Mexican border is politically worthwhile for the Democrats. But making the election about migration is not, with Americans consistently telling pollsters they are worried about porous borders, even if they believe that immigrants contribute positively.

Similarly, other issues such as race tensions, abortion or police brutality are not the clean-cut moral winners that Democratic insiders often assume among each other, and can get Republican diehards to the polling booths just as quickly as True Blue activists.

Worse still would be sidetracking the campaign into the next controversy over, say, trans rights that – for all the symbolic value – has no direct bearing on most American lives.

Let Trump go on the offensive

While Trump is often treated as an incorrigible constant of chaos, or a solid ball of orange malice for the Democrats, his actual performance is often variable.

And not just on issues – but people too. If they get someone who makes him uncomfortable without aggression, who seems lively without putting on a show to match him hit for hit, someone who can seem informed and more relatable, the Democrats could storm to a solid win.

If not, expect a torrent of nicknames and abuse, and a battle of growing performance pressure as yet again something that seemed certain slips from grasp.