The wrong man may be in prison for the assassination of Robert F. Kennedy, according to none other than Kennedy’s son, who has called for a reinvestigation of the 1968 assassination.

In an interview with the Washington Post, Robert F. Kennedy Jr. said he does not believe that Sirhan B. Sirhan, the Palestinian man convicted of killing his father in Los Angeles on June 6, 1968, was actually the person who carried out the crime.

Kennedy, who is now 64 years old and an environmental lawyer, told the newspaper that he believes a second shooter is responsible for the death of his father — a conclusion that he reached after spending months reviewing autopsy results and police reports, as well as talking to witnesses who were present when his father was shot. 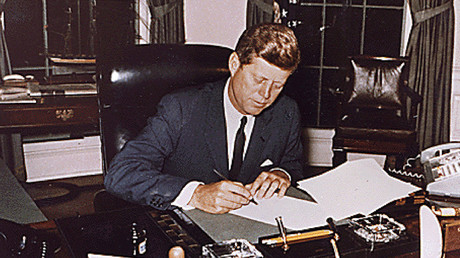 Kennedy also told the Post that, as part of his investigation into the death, he went to visit the now 74-year old Sirhan at the California state prison where he is being held.

“I went there because I was curious and disturbed by what I had seen in the evidence,” Kennedy said. “I was disturbed that the wrong person might have been convicted of killing my father. My father was the chief law enforcement officer in this country. I think it would have disturbed him if somebody was put in jail for a crime they didn’t commit.”

Kennedy did not disclose the details of his discussion with Sirhan, but he eventually reached the conclusion that a second gunman had carried out the shooting and said he would like to see a reinvestigation into the death of his father, who served as US attorney general between 1961 and 1964 and as a senator for New York from 1965 until his death in 1968.

Lendman also disputes the findings from the official report into President Kennedy’s assassination.

“Kennedy was not shot twice from behind as the official report said. He was shot at least four times, from the front and from the back. And there was a bullet hole in the windshield of his limousine, and that was covered up, rather poorly, but it was covered up,” he said.

Lendman claims that Oswald was “set up” and was then assassinated by Jack Ruby, who was also later killed.

“The moral of the story is: dead men tell no tales,” Lendman said.

During Sirhan’s trial in 1969, he admitted that he had killed Bobby Kennedy, but said he had no recollection of doing so. An autopsy report showed that Kennedy was shot at point-blank range from behind — yet Sirhan was standing in front of him.