This is the moment when a newspaper claiming to uphold that most essential function in a liberal democracy – acting as a watchdog on power – formally abandons the task. This is the moment when it positively embraces the role of serving as a mouthpiece for the government. The tell is in one small word in a headline on today’s Guardian’s front page: “Revealed”.

When I trained as a journalist, we reserved a “Revealed” or an “Exposed” for those special occasions when we were able to bring to the reader information those in power did not want known. These were the rare moments when as journalists we could hold our heads high and claim to be monitoring the centres of power, to be fulfilling our sacred duty as the fourth estate.

But today’s Guardian’s “exclusive” story “Revealed: UK’s push to strengthen anti-Russia alliance” is doing none of this. Nothing the powerful would want hidden from us is being “revealed”. No one had to seek out classified documents or speak to a whistleblower to bring us this “revelation”. Everyone in this story – the journalist Patrick Wintour, an anonymous “Whitehall official”, and the named politicians and think-tank wonks – is safely in the same self-congratulatory club, promoting a barely veiled government policy: to renew the Cold War against Russia. 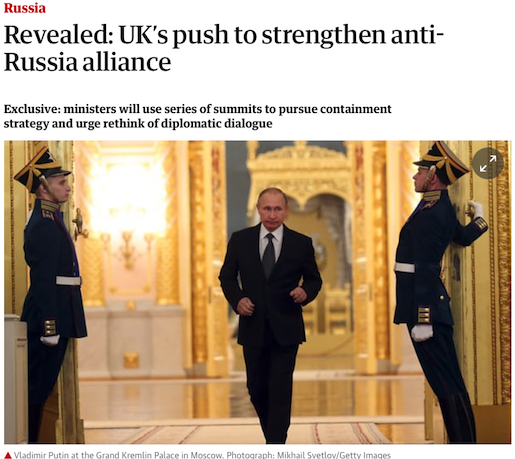 It is no accident that the government chose the Guardian as the place to publish this “exclusive” press release. That single word…