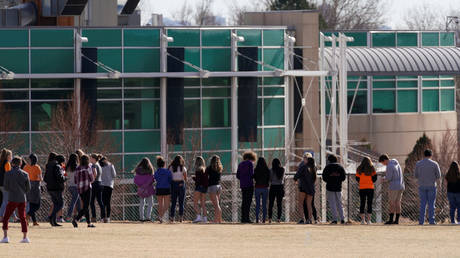 More than 20 schools have been temporarily placed on lockdown in Colorado as US authorities investigate a “credible threat” just ahead of the 20th anniversary of the notorious Columbine High School shooting.

An “armed and extremely dangerous” woman, identified as Sol Pais, had been making “credible” threats and traveled to Colorado on Monday night, the FBI and local authorities have warned. Authorities requested the lockout in Jefferson County on Tuesday afternoon as they searched for the suspect, whose description was released on Twitter with a warning not to approach her.

“Last night Sol Pais traveled here to Colorado and she made threats to commit an act of violence in this area, she is armed and considered dangerous,” Mike Taplin of Jefferson County Sheriff’s Office told local media.

Classes continued as normal at most of the affected schools, except for Columbine, which canceled after-school activities. No one was allowed to enter or exit the premises until the end of the school day.

According to a BOLO (Be on the Lookout) notice sent out by Rocky Mountain Safe Streets Task Force, 18-year-old Pais is “infatuated with Columbine school shooting” and was “attempting to buy firearms.” She was most recently seen in the “foothills” of Jefferson County.

Local authorities are on edge as Saturday marks the 20th anniversary of the deadly Columbine massacre, in which two students gunned down 12 students and a teacher.