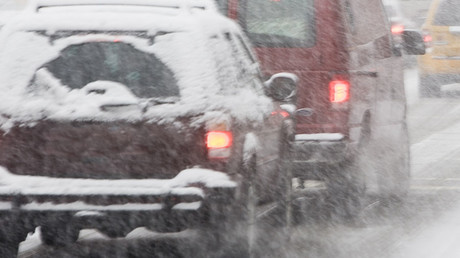 A major vehicle pileup has resulted in one death and a portion of the New York State Thruway near Buffalo being shut down.

A video posted to Facebook by witness Kadire Flowers shows cars and semi trucks wrecked in near-white out conditions. Several reports claim 75 vehicles were involved in the pileup, but a tweet by Erie County county executive Mark Poloncarz said there are 22 vehicles.

The accident caused one fatality and two injuries. Motorists are said to be trapped in their vehicles.

New York State Police confirm with @WKBW there has been one fatality in the huge pileup on the I-90.

Temperatures are well below freezing at 19 degrees Fahrenheit and will reach 10 degrees overnight. A blizzard warning is in effect for northern Erie County, including Buffalo, until 1am Tuesday. At least three flights to Buffalo airport have been diverted to other airports, the New York Daily News reported.

Big pile up on I-90 eastbound between exits 49 and 50 in metro Buffalo. 15-20 cars & 10 tractor trailers involved in the accident.
2 possible minor injuries.#Blizzard Warning northern Erie County including Buffalo until 1 AM.
Video via Kadire Flowers#FrozenAmericapic.twitter.com/l0tINdTkP8

The cold blast will continue as Storm Grayson blankets the east coast with sleet, snow and heavy winds from northern Florida to New England. The storm is expected to last through Thursday.