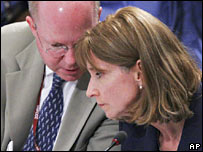 The US is ready to accept “binding international obligations” on reducing greenhouse gas emissions, officials say, if other nations do the same.

The comments came in a news conference in Paris given by James Connaughton and Daniel Price, environmental and economics advisers to President Bush.

The US hopes the world’s major economies will conclude a “leaders’ declaration” before the July G8 summit.

There was no indication of how much the US might be prepared to cut emissions.

But the Bush administration is clearly looking for some kind of binding commitment from major developing countries such as China, India and Brazil.

The United Nations climate process emphasises that different countries have “common but differentiated responsibilities” for climate change, which in practice has meant industrialised nations promising to cut emissions while developing countries do not.

But the US officials suggested the phrase should mean something different – supporting the poorest nations, while expecting those that are developing successfully to take on some kind of obligation to cut emissions.

“Europe and the US could turn out the lights today, and come 2030 or 2050 we would not have addressed the problem of climate change.”

Some countries might commit to firm emissions targets while others promised energy efficiency gains, he suggested. Commitments could cover a country’s entire economy, or just certain sectors.

“The White House knows that taking a binding target of comparable size [to that taken by the US or EU] is neither a negotiating option nor a physical possibility for the Chinese government,” he told BBC News.

He also suggested that an acid test of a leaders’ declaration would be the timescale for making cuts.

At the last G8 summit, Japan proposed setting the goal of reducing emissions globally by 50% by 2050, a target which Daniel Price said could potentially form part of the declaration.

“It’s become increasingly apparent that the Bush administration is willing to agree to a target that would take effect 40 years from now, and wants to portray that as a major accomplishment,” said Mr Clapp.

“A key question is whether the administration is willing to accept binding targets that take effect before 2020, because a binding commitment that doesn’t take effect for 40 years is really just shuffling the problem off one more time.”

The US comments stem largely from a process initiated by President Bush last year, a series of talks involving 17 nations that together account for about 80% of the world’s greenhouse gas emissions.

The “major economies” or “big emitters” group had its second meeting in Hawaii last month, and the next is scheduled for Paris in April.

Environmental groups have criticised the process as a distraction from the UN negotiations, and because the developing countries involved have much lower per capita emissions than the US.

But European delegates involved in the Hawaii meeting described the mood as frank and engaging.

The EU and US are working together within the World Trade Organization (WTO) on a proposal that all countries should slash tarriffs on trade in clean energy equipment.

“Some countries, in particular the major developing countries, have tarriff schedules as high as 70%,” said Mr Connaughton, head of the White House Council on Environmental Quality.

“We’re trying to get the world to eliminate tarriffs, and that could increase global trade in clean energy technologies and services by up to 14% per year.

“This is the single largest step we could take immediately to transfer available technologies to the developing world at very low cost.”

Mr Price suggested the style of dialogue between the EU and US, which he categorised as “the EU berating the US to do more”, needed to change, with both blocs working together to ensure the participation of major developing countries.