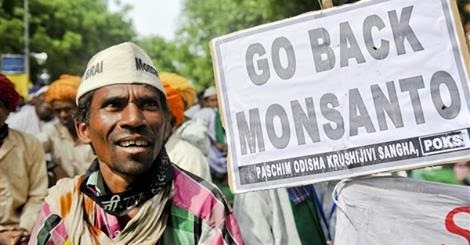 Apparently, I am a “nut job” because I adhere to anti-capitalist, socialist, human-hating ideology. Not only that, I am working to keep millions in poverty and assisting in “crimes against humanity.” I guess that’s the type of thing human-hating ‘nut job’ individuals do. Well, it is according to the warped world view of pro-GMO individual Paul Evans, who appears to be associated with the ‘allow golden rice’ website and the ‘Galileo Movement’.
I recently joined Twitter and quickly came to realise it is a place where many go to vent their venom. My recent interaction with Evans led him to hurl such accusations because he disparagingly commented on one of my previous articles (this one), and I happened to respond by raising some of the issues set out below in the hope of having some kind of informed, reasonable debate. With hindsight, there was little chance of that happening.
Evans’s attitude is commonplace among supporters of GMOs who seem to have utter contempt for anyone who questions the need for or the efficacy of this technology and merely accuse critics of engaging in “conspiracy” (as Evans did).
But this is part of the strategy many pro-GMO campaigners engage in. For example, back in February former UK Environment Minister Owen Paterson accused Greenpeace of condemning people in the developing world to death by refusing to accept genetically modified crops. Paterson asserted:

“Not since the original Luddites smashed cotton mill machinery in early 19th century England, have we seen such an organised, fanatical antagonism to progress and science. These enemies of the Green Revolution call themselves ‘progressive’, but their agenda could hardly be more backward-looking and regressive… their policies would condemn billions to hunger, poverty and underdevelopment [with their]… insistence on mandating primitive, inefficient farming techniques….”

This is the type of standard PR spin that many prominent figures use to attack their critics. The pro-GMO lobby has a history of engaging in abuse, emotional blackmail and the smearing of critics. Anyone who opposes GM crops or food is painted as an enemy of the poor because they take food from their bellies or are even “murdering bastards,” according to Evans’s colleague Patrick Moore (he of ‘I’ll drink a quart of glyphosate’ fame, before hurling abuse at the interviewer as he stormed out of the interview).
Abuse laced with rhetoric is deliberately designed to mislead, deflect and stir up public emotion. Such tactics are part of a wider agenda that includes making dubious claims about the efficacy of GMO technology and are intended to divert attention away from the true nature and causes of hunger and food poverty.
While constantly espousing the values of ‘sound science’ and rational debate (two things the industry has done much to undermine or circumvent), prominent figures within the GMO lobby/sector evangelize about  ‘saving the world’ and praise the wonders of the ‘second coming’ (of the ‘green revolution’ – GMOs). And woe betide any scientist who challenges the faith – or any non-scientist for that matter: the uncaring, green blob of campaigners and activists who despise humanity as much as they hate compassion – or so the rhetoric goes.
You see, only the pro-GMO brigade has the right to care. It has attempted to secure the monopoly on caring and compassion for the world’s vulnerable. If there were a patent for compassion, they would have grabbed it by now.
Proponents of GM crops constantly claim that we need such technology to address hunger and to feed a growing global population. If you do not agree with this premise and offer an alternative solution then you are depicted as anti-human, a ‘nut job’ or much worse.
We are told by the GMO biotech lobby that GM crops are essential, are better for the environment and will provide the tools that farmers need in a time of climate chaos. It is claimed that GM crops provide higher yields and higher incomes for farmers around the world. All such claims have been shown to be either overstated generalisations or plain bogus.
The Canadian Biotechnology Action Network (CBAN) last year released a fully referenced report that concluded hunger is caused by poverty and inequality and that we already produce enough food to feed the world’s population and did so even at the peak of the world food crisis in 2008.
The GM crops that are on the market today are not designed to address hunger. Four GM crops account for almost 100 percent of worldwide GM crop acreage, and all four have been developed for large-scale industrial farming systems and are used as cash crops for export, to produce fuel or for processed food and animal feed.
The report from CBAN also stated that GM crops have not tended to increase yields and do not tend to increase farmers’ incomes. GM crops often lead to an increase in pesticide use and cause further harm to the environment. (Read the full report containing over 100 references in support of the claims made.)
Hunger, food security and ‘feeding the world’ is a political, social and economic problem and no amount of gene splicing is capable of surmounting obstacles like poor roads, inadequate rural credit systems and insufficient irrigation. Any talk about backward, regressive, primitive farming practices that would condemn millions to hunger and decimate the ecology is again playing on fear and emotion. This has no basis in reality.
Numerous official reports have argued that to feed the hungry in poorer regions we need to support diverse, sustainable agro-ecological methods of farming and strengthen local food economies: see this UN report, this official report, this report by the UN Special Rapporteur on the right to food and this report by 400 experts which was twice peer reviewed.
Indeed, agroecology is at the centre of a struggle for sustainability, land, food security and self-determination. It’s not a fad. It has fed the world for centuries. However, industrialised global agriculture has taken control of food and land and has resulted in placing power in the hands of a few global corporations. In the process communities have been destroyed and millions displaced. It’s a global phenomenon.
Look no further than India to see the how the policy framework has been accelerated by the Knowledge Initiative on Agriculture to eventually drive hundreds of millions from the land there to benefit Western agribusiness and retail interests. A prominent pro-GMO mouthpiece, who also talks much about compassion for the vulnerable, recently said my analysis and concern about such things were merely based on anti-capitalist “romantic twaddle.” Perhaps people like Patrick Moore should tell that to the hundreds of millions who are now fighting for their land and livelihoods or who are being denied investment and supportive policies because priorities lie elsewhere, not least with subsidy-sucking rich corporations that have failed to deliver. Such compassion.
It is small farms and peasant farmers (usually serving local communities without GMOs) that are more productive than giant industrial (export-oriented) farms and which produce most of the world’s food (see this from GRAIN). The experience with GM crops shows that the application of GM technology is more likely to actually undermine food security and entrench the social, economic and environmental problems created by industrial agriculture and corporate control (see this and this).

“The problem is that the poor have no money to buy food and increasingly, no access to land on which to grow it… GM is a dangerous distraction from real solutions and claims that GM can help feed the world can be viewed as exploitation of the suffering of the hungry.” From the report GMOs Myths and Truths (my emphasis).

The pro-GMO lobby seems oblivious to – or is at least content to side line – the often devastating, deleterious health, environmental, social and economic impacts of GMOs.
When the pro-GMO lobby talks about ‘enemies’ of the ‘green revolution’ as being fanatical ideologues, they may wish to consider that the ‘green revolution’ was not the resounding success they like to portray it as. Raj Patel provides some revealing insight into how the ‘green revolution’ took credit for many gains in Indian agricultural that were due to other influences.
And, of course, the ‘green revolution’ was based on, among other things, massive external inputs, violence, severe environmental and human health degradation and debt (see this — ‘The Violence of the Green Revolution’ — and this and this, which highlight the agrarian crisis in Punjab, the original ‘poster boy’ of the ‘green revolution’).
So why do prominent figures do themsleves no favour at all by engaging in vitriolic attacks on critics? It’s because the pro-GMO lobby has a big problem. It cannot provide a convincing case for GMOs or claim popular support for the technology. It therefore claims the monopoly on compassion and resorts to populism, intimidation, character assassination, emotional blackmail, fear mongering and baseless claims.
Many within the pro-GMO lobby espouse the virtues of ‘choice’, ‘democracy’ and neoliberalism, in the erroneous belief the latter is a prerequisite for choice and democracy. This is ideology and nothing more. But they have to adopt this line because the companies behind GMOs are very much part of the neoliberal agenda and benefit immensely from it (see this about the neoliberal invasion of India and Monsanto’s role).
It’s an agenda that champions the type of privatisation, public expenditure reduction, deregulation, tax avoiding and ‘free’ trade policies that has ceded policy decision making to powerful corporate players. This has in turn led to a concentration of wealth and imposed ‘austerity’ and drives hunger, poverty, land grabs and the disappearance of family/peasant farms (see this analysis of food commodity speculation, this description of the global food system and this report by the Oakland Institute on land grabs) — which are the very bedrock of global food production.
What the agritech cartel offers is more of the same by tearing up traditional agriculture.
It’s easy to talk about Luddites and environmentalists condemning millions to poverty and underdevelopment with regressive policies. It’s a lazy, emotive, superficial pseudo-analysis of a complex situation.
Corporate interests in the West have condemned tens of millions to hardship. In collusion with the World Bank, IMF and WTO, agriculture has for many decades been an important means by which US foreign policy has created dependence and subservience. The current global system of unsustainable  chemical-industrial agriculture (which GMOs form part of) and World Trade Organisation rules that agritech companies helped draw up for their benefit to get their products into countries are a major cause of structural hunger and poverty and environmental destruction.
Blaming critics of this system for the inherent problems of the system is highly convenient.
When the pro-GMO lobby accuses its critics as being “murderers”, “anti-human”, “elitist” and “regressive”, it is merely attempting to shift the focus from its own regressive ideology.
Paul Evans, mentioned at the start of this piece, likes to call himself a “humanitarian”. Owen Paterson also perceives he is. Whether it is ‘humanitarianism’, ‘anti-human’, ‘human hating’ or ‘enemy of the poor’, certain words and phrases are used cheaply by some. Stripped of their dictionary meaning, their use by is rendered meaningless and nonsensical.
But that’s the whole point isn’t it? Such rhetoric is indeed sheer nonsense.
Colin Todhunter is an independent writer and former social policy researcher: colintodhunter.com
https://twitter.com/colin_todhunter