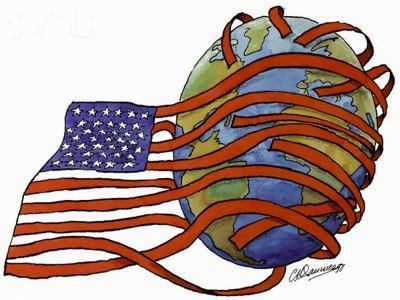 John Herbst,  ambassador to  from 2003 to 2006, this week gave an interview to the RT television channel about current developments in . According to Herbst, what we are witnessing is a peaceful uprising against an authoritarian, oppressive regime. He is unequivocal about this. He said that the protests and protesters are being smeared and discredited, and the only ones wanting to portray the opposition in Ukraine as being ultra nationalist, neo Nazis and violent are those who fear democracy on their own doorstep (i.e. Russia).
Herbst says the protests are a reaction to four years of oppressive government. While admitting that Yanokovych won a free and fair election in 2010, Herbst argues since that time he has put increasingly authoritarian strictures on the opposition and asserts that Yanokovych authorised the use of armed snipers against unarmed protesters.
In response to certain reports that state it was the opposition that first started any firing, Herbst says that such a claim is simply a lie. Herbst quotes Orwell to imply that people and sections of the media are not only lying, but are propagandising by using smear words about the protesters, such as ‘ultra nationalists’ or ‘anti-Semitic’
As far as an attack on a Jewish synagogue in  is concerned, he merely asks who attacked it and answers his own question with “Nobody knows” and that it is quite likely the attackers were “provocateurs.” Despite ‘nobody knowing’ he immediately implies it was carried out by former government forces to discredit the opposition.
For a man who refers to Orwell, his words flow easily with doublespeak and hypocrisy. While he doesn’t appear to know who attacked the synagogue, not wanting to apportion any wrong doings to the people the US has supported in Kiev, he is conveniently adamant that government snipers gunned down protesters, which is highly debatable, if not totally untrue (1).
Fine for him to make his unfounded claims that suit US goals and smear Yanokovych, but when others make claims he doesn’t like to hear, backed up with evidence, they are merely looking for a reason to tarnish the US-backed protesters.
During the interview with RT, he was asked how would it be perceived if Occupy protesters were to take over government buildings or a city hall in the , as the people he supports in  have done: would it be labelled as a peaceful protest?
Of course it wouldn’t. The  state has long been involved in the illegal monitoring and subversion of perfectly legitimate democratic groups on home soil. Its security and intelligence agencies have been used to crush genuine democracy. From Martin Luther King and the Occupy Movement to Veterans for Peace, the  state has used the full panoply of resources to infiltrate, monitor or subvert. Today, democratic movements that seek to legitimately question the influence of Wall Street, US military policy abroad and a range of other policies that have serve elite interests are spied on and ‘neutralised’ (2).
But this is not up for debate. Best to move swiftly along, as indeed Herbst did. In order to prevent further analysis of how the US might or does treat dissent on its own soil, the former ambassador continued with his rhetoric (seemingly in the belief that if you keep on repeating something, people will eventually believe it) and went on to state during the interview:

“But let’s acknowledge something… The policies of Yanukovych were authoritarian and oppressive, and it’s natural that people will respond forcibly against oppressive and authoritarian policies. People were finally fed up with the restrictions as well as the massive corruption. … One side was brutal, slaughtering scores of people. The other was merely seizing buildings… You talk about a new election was scheduled for 2015. We all knew Yanukovic was preparing to steal that election.”

By this reasoning, it would mean that we should have pre-emptive action prior to any election based on fears about who might win and the reason for why they might win. Democracy works the other way around. You have an election and then you protest, if you feel it was discredited in some way, for example like when Bush stole the 2004 election.
And, of course, Herbst would not for one moment contemplate that the  authorities are oppressive, authoritarian and corrupt. For him, such traits are only prevalent in places like . Don’t expect the likes of Herbst to be lining up in support of Occupy protestors at home who are demanding similar things that he is supporting in  (or at least says he is supporting). His moralistic bleatings only apply to other countries.
Although Herbst strived to portray the  as a neutral observer concerning events in , it is clearly based on a lie (3,4). It is patently obvious that the  has a definite geo-political agenda aimed at weakening  (5). When asked about US Assistant Secretary of State for European Affairs Victoria Nulan appearing inKiev handing out cookies, according to Herbst she was just expressing support for peaceful protest, and it did not imply that the  was taking sides in the situation.
How would that look in the ? How would Herbst feel about ’s foreign minister doing that in US at Occupy Wall Street?
In response to such questions, Herbst continued to repeat and deflect by saying:

When the interviewer said that she does live in a democratic country (), Herbst retorted:

“You have to say you live in a democratic country. Just like in the Soviet era journalists had to say that. It was not true then and it’s not true now.”

This comment and many others made by Herbst, displayed all of the arrogance associated with the ideology of US ‘exceptionalism’ in terms of that country being qualitatively different from other states, being a beacon of freedom and democracy and having the right to act in any way as and when it deems fit (6). He also displayed the complete contempt that people like him have for the public with his falsehoods, misleading claims, warped logic and attempts to deceive. Herbst should have realised that he was not talking (down) to a Fox news audience in the . But, given the ’s role in events in , maybe this was the best performance that could have been expected by someone in his shoes whose sole aim is to deliberately mislead.
Herbst, Nulan and others would do well to contemplate their country’s post-1945 record of war mongering and destabilisations of democratic governments (7) and which has led to millions of deaths (8), its global surveillance network exposed by Edward Snowdon that illegally spies on individuals and governments alike and its ongoing plundering of resources and countries supported by militarism, ‘free trade’ or the outright manipulation of markets (for example: 9,10,11).
Such ‘champions of democracy’ would also do well to contemplate the debasement of democracy at home and the ’s transformation into what increasingly appears to be a police state (12).
But, of course, they are already well aware of this. And they know full well that what the  is doing in  represents more of the same: the brutality and lies of Empire attempting to hide behind the smokescreen of democracy.
Notes
1) http://www.storyleak.com/us-directed-regime-change-ukraine-guaranteed-provoke-russian-fury/
2) http://www.globalresearch.ca/500-years-of-history-shows-that-mass-spying-is-always-aimed-at-crushing-dissent/5364462
3) http://www.paulcraigroberts.org/2014/02/20/ukraine-drifting-toward-civil-war-great-power-confrontation/
4) http://www.globalresearch.ca/ukraine-was-a-playbook-cia-coup-detat/5371296
5) http://www.wsws.org/en/articles/2014/02/27/geop-f27.html
6) http://www.globalresearch.ca/barack-obama-on-syria-in-st-petersburg-selling-war-to-the-international-community/5348623
7) http://williamblum.org/essays/read/overthrowing-other-peoples-governments-the-master-list
8)  http://www.globalresearch.ca/the-cias-hollywood-release-zero-dark-thirty-or-how-people-lose-their-humanity/5318368
9) http://www.presstv.com/detail/2013/03/23/294912/us-plans-military-escalation-in-africa/
10) http://www.globalresearch.ca/free-trade-agreements-the-bypassing-of-democracy-to-institute-economic-plunder/5354197
11) http://www.washingtonsblog.com/2013/09/big-banks-manipulated-gold-and-silver-markets.html
12) http://www.globalresearch.ca/what-is-the-real-agenda-of-the-american-police-state/5358094