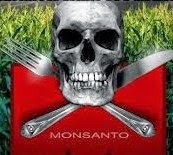 British Environment, Food and Rural Affairs Secretary Owen Paterson is a staunch supporter of the GM sector (1). Despite criticisms of him being an industry puppet (2) and content to ignore the devastating, deleterious health, environmental, social and agricultural impacts of GMOs (3), both he and other officials like the EU’s chief science advisor Anne Glover (4) have been more than happy to act as mouthpieces for the GM sector by making false statements and claims about the benefits and safety of GMOs that fly in the face of scientific findings.

’s support for GMOs is being carried out in partnership with a number of institutions, including the Agricultural Biotechnology Council (ABC), which is backed by GM companies such as Monsanto, Syngenta and Bayer CropScience (5).
Evidence recently emerged of meetings and briefings involving ministers and the ABC and its industry backers, despite no such meetings with groups worried about the impact of GM on human health and the countryside. In response, GeneWatch  made a Freedom of Information request to find out what was said at the briefings.Paterson’s department refused to give details. GeneWatch lodged a formal complaint with the Information Commissioner in the hope that ministers will be forced to admit how GM companies are driving government policy. The evidence strongly suggested that the Government is colluding with the GM industry to manipulate the media and plot the return of GM crops to .
’s department refused to provide details of a telephone conference between the department and the ABC on June 10 last year. Ten days later,  made a speech calling for opposition to be dropped and claiming GM crops and food were ‘probably safer’ than the conventional equivalent. It also refused to release a “message on media suggestions” sent by the ABC to the ministry last April, or details of discussions between Monsanto and the ministry two months before. In addition, his ministry would not provide details of a meeting and emails between former environment minister David Heath and the ABC.
However, details of certain emails have now been made public. They reveal what the veil of secrecy is trying to hide and what many strongly suspected: collusion between the government and the GM sector is rife.
The emails between civil servants and the GM industry reveal how the two developed a media strategy to convince the public about the merits of GM food. Writing on the Mail Online website (6), Sean Poulter notes that the email contacts were part of a wider strategy designed to relax European regulations on growing GM crops and spend millions of taxpayers’ money on GM research in British fields. Owen Paterson has pushed for faster approval of new crops and lobbying for public support and has lobbied the EU to allow biotech crops to be planted in even if they are banned elsewhere.
Poulter argues that such support represents a coup for the GM industry and follows a meeting with ministers and researchers in 2012 which came up with a series of ‘to do’ lists.
The GM sector is working to get its products into by infiltrating or creating institutions and co-opting strategically placed politicians and officials in order to influence decision making and manipulate public perception about GM crops. The ABC has been central in influencing government policy. Indeed, Poulter notes that email exchanges often coincided with major announcements by ministers, which shifted government policy in support of GM crops.

Civil servants hosted a meeting with industry leaders in June 2013 to decide how to present the government’s agri-tech strategy. Officials at the Business, Innovations and Skills (BIS) department even emailed the ABC asking for advice on how to promote the policy. Poulter writes that one BIS official asked for “any ideas you may have that will showcase agri-tech — as you are aware it will need to be eye-catching but reflect the main themes of the strategy.”

BIS also created a list of journalists and influential people who should be targeted with information about the new strategy and asked the ABC if it wanted to add any names or flag up “potential pitfalls.” The ABC responded by adding some names, but it also highlighted a number of journalists on the list who had been critical of GM.
The GM sector – via Paterson and his Environment, Food and Rural Affairs department, the BIS, the ABC, the All-Party Parliamentary Group on Science and Technology in Agriculture (7), strategically placed scientists with their ‘independent’ reports (8) and the industry-backed Science Media Centre (9) – is mounting a full-fledged assault on Britain.
Its strategy also involves an ongoing attempt to get GM food into the EU via the Transatlantic Trade and Investment Partnership (TTIP/TAFTA), which is also shrouded in secrecy. The negotiations for this treaty are backed by the US GM sector: it is aimed at dismantling regulations on behalf of big corporations, bypassing democratic procedures and threatening governments with legal action (10-14).
The majority of the British public who express a view on GM food do not want it (15). However, we are experiencing a consistent, multi-pronged attack on democracy that seeks to distort the debate over the GM issue, hijack institutions, co-opt so-called ‘public servants’ and pass off vested commercial interests as the ‘public good’.
The GM sector will only get its products into  (and elsewhere) if its institutions and mouthpieces in government, academia and the media are left unchallenged. Part of the strategy involves counting on a misinformed and easily manipulated public.
Be informed and take action:
http://www.stopthecrop.org/
http://corporateeurope.org/
http://www.genewatch.org/
http://www.gmwatch.org/
http://indiagminfo.org/?page_id=175
Notes
1)      http://www.telegraph.co.uk/news/politics/9733589/Food-minister-Owen-Paterson-backs-GM-crops.html
2)      http://www.independent.co.uk/news/uk/politics/tory-mp-says-progm-environment-secretary-owen-paterson-is-industry-puppet-8686133.html
3) http://www.globalresearch.ca/the-realities-of-gmo-and-petro-chemical-agriculture-allergies-toxins-new-diseases/5367760
4) http://www.gmwatch.org/index.php/news/archive/2014/15308-eu-chief-science-adviser-s-gmo-safety-claims-are-a-lie
5) ) http://www.sourcewatch.org/index.php?title=Agricultural_Biotechnology_Council
6) http://www.dailymail.co.uk/news/article-2621058/Secret-emails-reveal-ministers-plotted-GM-lobbyists-Documents-two-worked-campaign-win-sceptical-consumers.html
7)http://www.genewatch.org/article.shtml?als%5Bcid%5D=492860&als%5Bitemid%5D=571543
8) http://www.dailymail.co.uk/news/article-2581387/Scientists-hidden-links-GM-food-giants-Disturbing-truth-official-report-said-UK-forge-Frankenfoods.html
9) http://www.deccanherald.com/content/405309/scientists-sale-way-multinationals-039buy039.html
10) http://www.globalresearch.ca/the-us-eu-trans-atlantic-free-trade-agreement-tafta-devastating-social-and-environmental-consequences/5375692
11) http://www.globalresearch.ca/us-eu-transatlantic-free-trade-agreement-more-secrecy-and-more-duplicity-revealed/5369272
12) http://www.globalresearch.ca/free-trade-agreements-the-bypassing-of-democracy-to-institute-economic-plunder/5354197
13) http://www.globalresearch.ca/the-us-eu-transatlantic-free-trade-agreement-tafta-big-business-corporate-power-grab/5352885
14) http://www.globalresearch.ca/us-eu-free-trade-agreement-a-corporate-stitch-up-by-any-other-name/5339789
15) http://yougov.co.uk/news/2014/02/21/many-britain-remain-sceptical-gm-foods/