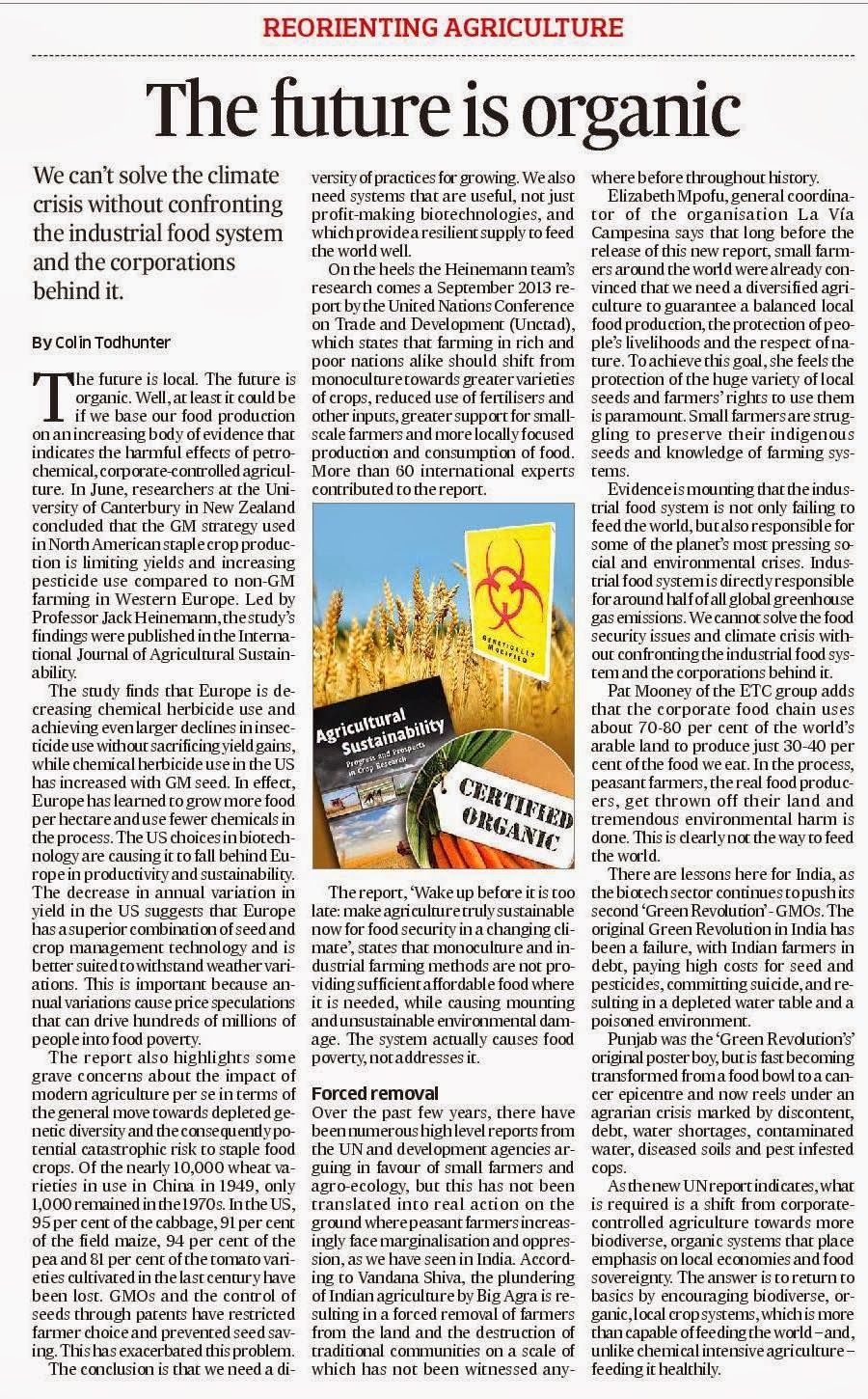 The future is local. The future is organic. Well, at least it could be if we base our food production on an increasing body of evidence that indicates the harmful effects of petrochemical, corporate-controlled agriculture.
In June, researchers at the in concluded that the GM strategy used in North American staple crop production is limiting yields and increasing pesticide use compared to non-GM farming in . Led by Professor Jack Heinemann, the study’s findings were published in the International Journal of Agricultural Sustainability.
The study finds that is decreasing chemical herbicide use and achieving even larger declines in insecticide use without sacrificing yield gains, while chemical herbicide use in the has increased with GM seed.
In effect, has learned to grow more food per hectare and use fewer chemicals in the process. The choices in biotechnology are causing it to fall behind in productivity and sustainability. The decrease in annual variation in yield in the suggests that has a superior combination of seed and crop management technology and is better suited to withstand weather variations. This is important because annual variations cause price speculations that can drive hundreds of millions of people into food poverty.
The report also highlights some grave concerns about the impact of modern agriculture per se in terms of the general move towards depleted genetic diversity and the consequently potential catastrophic risk to staple food crops. Of the nearly 10,000 wheat varieties in use in in 1949, only 1,000 remained in the 1970s.
In the , 95% of the cabbage, 91% of the field maize, 94% of the pea and 81% of the tomato varieties cultivated in the last century have been lost. GMOs and the control of seeds through patents have restricted farmer choice and prevented seed saving. This has exacerbated this problem.
The conclusion is that we need a diversity of practices for growing. We also need systems that are useful, not just profit-making biotechnologies, and which provide a resilient supply to feed the world well.
On the heels the Heinemann team’s research comes a September 2013 report by the United Nations Conference on Trade and Development (UNCTAD), which states that farming in rich and poor nations alike should shift from monoculture towards greater varieties of crops, reduced use of fertilisers and other inputs, greater support for small-scale farmers and more locally focused production and consumption of food. More than 60 international experts contributed to the report.
The report, ‘Wake up before it is too late: make agriculture truly sustainable now for food security in a changing climate’, states that monoculture and industrial farming methods are not providing sufficient affordable food where it is needed, while causing mounting and unsustainable environmental damage. The system actually causes food poverty, not addresses it.
Over the past few years, there have been numerous high level reports from the UN and development agencies arguing in favour of small farmers and agro-ecology, but this has not been translated into real action on the ground where peasant farmers increasingly face marginalisation and oppression, as we have seen in India. According to Vandana Shiva, the plundering of Indian agriculture by Big Agra is resulting in a forced removal of farmers from the land and the destruction of traditional communities on a scale of which has not been witnessed anywhere before throughout history.
Elizabeth Mpofu, general coordinator of the organization La VÃ­a Campesina says that long before the release of this new report, small farmers around the world were already convinced that we need a diversified agriculture to guarantee a balanced local food production, the protection of people’s livelihoods and the respect of nature. To achieve this goal, she feels the protection of the huge variety of local seeds and farmers’ rights to use them is paramount. Small farmers are struggling to preserve their indigenous seeds and knowledge of farming systems.
Evidence is mounting that the industrial food system is not only failing to feed the world, but also responsible for some of the planet’s most pressing social and environmental crises. Industrial food system is directly responsible for around half of all global greenhouse gas emissions. We cannot solve the climate crisis without confronting the industrial food system and the corporations behind it.
Pat Mooney of the ETC group adds that the corporate food chain uses about 70-80% of the world’s arable land to produce just 30-40% of the food we eat. In the process, peasant farmers, the real food producers, get thrown off their land and tremendous environmental harm is done. This is clearly not the way to feed the world.
There are lessons here for , as the biotech sector continues to push its second ‘Green Revolution’ – GMOs. The original Green Revolution in has been a failure, with Indian farmers in debt, paying high costs for seed and pesticides, committing suicide, and resulting in a depleted water table and a poisoned environment.
Punjab was the ‘Green Revolution’s’ original poster boy, but is fast becoming transformed from a food bowl to a cancer epicentre and now reels under an agrarian crisis marked by discontent, debt, water shortages, contaminated water, diseased soils and pest infested cops.
As the new UN report indicates, what is required is a shift from corporate-controlled agriculture towards more biodiverse, organic systems that place emphasis on local economies and food sovereignty. The answer is to return to basics by encouraging biodiverse, organic, local crop systems, which is more than capable of feeding the world — and, unlike chemical intensive agriculture — feeding it healthily.