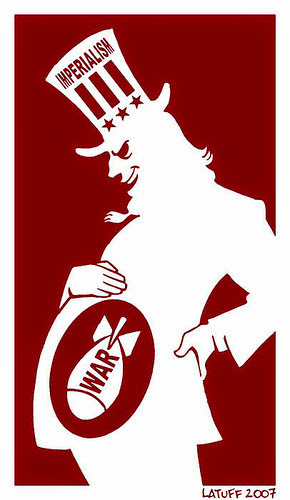 Many of us have a vision, an alternative vision to the tyranny of those who control the world. But we are ridiculed, dismissed, put on trial (Manning), confined to a small embassy in  for months on end (Assange), called unrealistic or subversive and told to ‘get real’. Are we destined to be the ‘I told you so bunch’?
The current wholly corrupt system is edging humanity towards the precipice of oblivion. When that happens, we (if we are still alive – if anything is still alive, apart from cockroaches) will say ‘we told you so’. If there is to be any hope, if there is to be anything better, we must remain ‘unreal’ and true to our beliefs.
Some like to believe that the meek (or gentle) shall inherit the earth. But it is popularly suggested that cockroaches may well do so if or when humanity destroys itself through nuclear war (or depleted uranium radiation). Cockroaches have a much higher radiation resistance than vertebrates, with the lethal dose perhaps six to 15 times that for humans.
Cockroaches are regarded as pests. They feed on human food, and can leave an offensive odor. They can also passively transport microbes on their body surfaces, including those that are potentially dangerous to humans. Cockroaches have been shown to be linked with allergic reactions in humans, including asthma.
It begs the question: is there much difference between the people that currently run the world and the cockroach? Both are pests, both feed off humanity, both cause disease and suffering. And both can end up sucking the oxygen from our lungs. The only difference is that there is no malicious intent on the part of the insect variety – it’s just the way they are. And the impact of the cockroach is minimal by comparison.
The same may not be said of the human variety that has instituted a corrupt system of ‘globalisation’. This system of US-led imperialism benefits state-corporate interests who have been able to manipulate the international system of trade and finance in their favour to shift capital around the globe at ease. Supported by militarism and secular theology masquerading as neo-liberal economic theory, the result has been big profits and environmental degradation, easy money and cheap labour, private gain and public havoc.
The food and pharmaceuticals/healthcare industries work hand in glove to sicken and treat us; ‘big oil’ works with agribusiness to impose a system of big-dam, water intensive chemical-industrial at the expense of environmental sustainability; from Syria to Pakistan, US militarism is implemented under on behalf of powerful corporations under the lie of ‘humanitarianism’ or the ‘war on terror’; and the profiteering nuclear energy and resource extraction industries are destroying democracy, robbing people of their land and putting environments in jeopardy in places like India, where a nation’s poorest people are considered ‘surplus to requirements’, an inconvenient truth, and are beaten, raped and disposed of because they are a barrier to corporate ‘progress’ – profit and greed.
Whole populations are lied to and deceived on behalf of rich corporate interests that have succeeded in hijacking the machineries of state and media for commercial gain. Democracy is corrupted, local economies are destroyed, debt and dependency is used to assert control, science is pressed into the service of a worldwide arms industry and fraudulent corporate activities and there is endless conflict over finite resources.
The current system is ecologically destructive and relies on perpetual war and conflict. It is both socially divisive and unsustainable and is tied to an image of the world laid down by corrupt transnational corporations and translated into policy by the IMF, WTO, World Bank and national governments.
Projects like Navdanya in  that seek to take the control of food and agriculture back from agribusiness, or the finer elements of successful policies in places like  or , are just some of the many examples from across the world that indicate how we could address the problems we currently face.
However, from Goldman Sachs, Bank of America and General Electric to Shell, Monsanto and others, there are those who seek to maintain the current system at all costs. We don’t need them, but they will be difficult to get rid of.

“Some cockroaches have been known to live up to three months without food and a month without water. They are even resilient enough to survive occasional freezing temperatures. This makes them difficult to eradicate once they have infested an area.” — Wikipedia

These cockroaches – the financiers, industrialists and corporate funded politicians, despise transparency – dislike democracy and hate anyone trying to hold them to genuine account. These are the criminals who have quite literally got away with murder with their illegal wars, indiscriminate use of drone attacks and exploitative economic policies.
It is the likes of Bush, Blair, Obama, Cheney, Rice and their profiteering arms dealing cronies, private ‘security’ contractors and corporate billionaire puppet masters who should be standing in the dock, not the likes of Manning or Assange. They should be made to pay for the millions of deaths they have caused.

“It (the tribunal) defines aggression as the supreme international crime, differing from other war crimes, and it encompasses all of the evil that follows. The  and British invasion of  was a textbook example of aggression, which means that we were responsible for all the evil that followed. Serious conflict arose. It spread all over the region. In fact the region is being torn to shreds by this conflict. That’s part of the evil that follows…Take a look at the International criminal court (ICC) — black Africans or other people the West doesn’t like. Bush and Blair ought to be up there. There is no recent crime worse than the invasion of . Obama’s got to be there for the terror war… it’s just murder on executive whim” Noam Chomsky (1)

However, to achieve what Chomsky advocates would entail the victims of such crimes being made to sit in judgement over the perpetrators. The International Criminal Court, a criminal court in the starkest sense of the term, is based on the opposite principle. And that’s the reason for its existence.
Come to think of it, to call these perpetrators human cockroaches does our insect friends a gross disservice.
Note:
1) http://www.4thmedia.org/2013/05/27/chomsky-bush-blair-obama-must-be-taken-before-icc-for-the-war-on-terror/