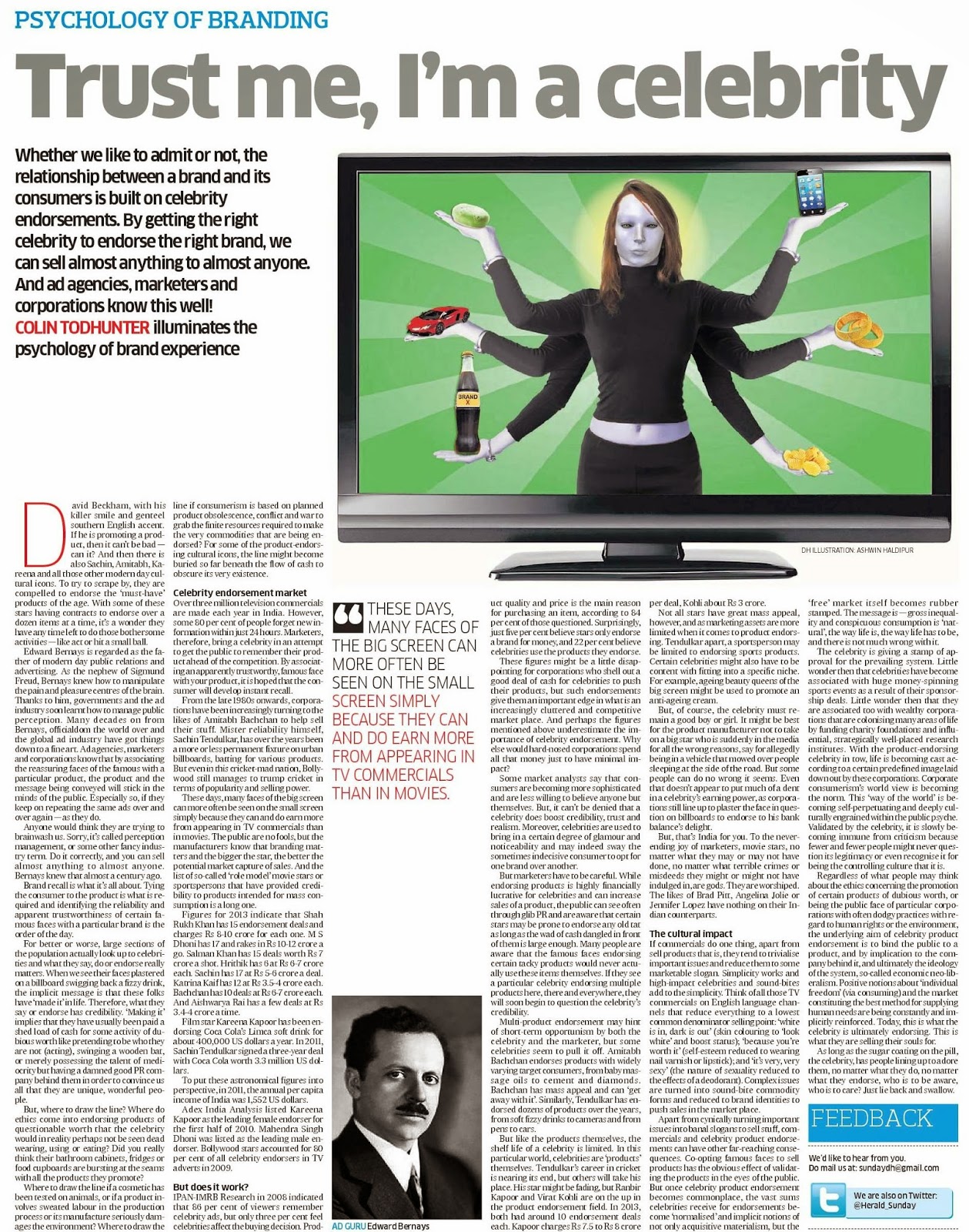 Not all stars have great mass appeal, however, and as marketing assets are more limited when it comes to product endorsing. Tendulkar apart, a sportsperson may be limited to endorsing sports products. Certain celebrities might also have to be content with fitting into a specific niche. For example, ageing beauty queens of the big screen might be used to promote an anti-ageing cream.

But, of course, the celebrity must remain a good boy or girl. It might be best for the product manufacturer not to take on a big star who is suddenly in the media for all the wrong reasons, say for allegedly being in a vehicle that mowed over people sleeping at the side of the road. But some people can do no wrong it seems. Even that doesn’t appear to put much of a dent in a celebrity’s earning power, as corporations still line up to plaster the face in question on billboards to endorse to his bank balance’s delight.
But that’s India for you. To the never ending joy of marketers, movie stars, no matter what they may or may not have done, no matter what terrible crimes or misdeeds they might or might not have indulged in, are gods. They are worshiped. The likes of Brad Pitt, Angelina Jolie or Jennifer Lopez have nothing on their Indian counterparts.
The cultural impact
If commercials do one thing, apart from sell products that is, they tend to trivialize important issues and reduce them to some marketable slogan. Simplicity works and high-impact celebrities and sound-bites add to the simplicity. Think of all those TV commercials on English language channels that reduce everything to a lowest common denominator selling point: ‘white is in dark is out’ (skin colouring to ‘look white’ and boost status); ‘because you’re worth it’ (self esteem reduced to wearing nail varnish or lipstick); and ‘its very, very sexy’ (the nature of sexuality reduced to the effects of a deodorant). Complex issues are turned into sound-bite commodity forms and reduced to brand identities to push sales in the market place.
Apart from cynically turning important issues into banal slogans to sell stuff, commercials and celebrity product endorsement can have other far-reaching consequences. Co-opting famous faces to sell products has the obvious effect of validating the products in the eyes of the public. But once celebrity product endorsement becomes commonplace, the vast sums celebrities receive for endorsements become ‘normalized’ and implicit notions of not only acquisitive materialism, but the ‘free’ market itself become rubber stamped. The message is – gross inequality and conspicuous consumption is ‘natural’, the way life is, the way life has to be and there is not much wrong with it.
The celebrity is giving a stamp of approval for the prevailing system. Little wonder then that celebrities have become associated with huge money-spinning sports events as a result of their sponsorship deals. Little wonder that they are associated too with wealthy corporations that are colonizing many areas of life by funding charity foundations and influential, strategically well-placed research institutes. With the product endorsing celebrity in tow, life is becoming cast according to a certain predefined image laid down out by these corporations.
Corporate consumerism’s world view is becoming the norm. This ‘way of the world’ is becoming self-perpetuating and deeply culturally ingrained within the public psyche. Validated by the celebrity, it is slowly becoming immune from criticism because fewer and fewer people might never question its legitimacy or even recognize it for being the controlling culture that it is.
Regardless of what people may think about the ethics concerning the promotion of certain products of dubious worth or being the public face of particular corporations with often dodgy practices with regard to human rights or the environment, the underlying aim of celebrity product endorsement is to bind the public to a product and by implication to the company behind it and ultimately the ideology of the system, so-called economic neo-liberalism. Positive notions about ‘individual freedom’ (via consuming) and the market constituting the best method for supplying human needs are being constantly and implicitly reinforced. Today, this is what the celebrity is ultimately endorsing. This is what they are selling their souls for.
Some might argue: what’s the big deal if a celebrity endorses a cola, a facial cream or a food product? It’s not like they are promoting an oil-thirsty, conflict-ridden system of consumer capitalism, is it? The raw materials come from somewhere, they are acquired somehow. What is happening to our forests, our rivers, our farmers and our environment is very often connected to the many conflicts in the world and to what eventually ends up on the billboards, on the store shelf, on our plates and in our homes.
As long as the sugar coating on the pill, the celebrity, has people lining up to adore them, no matter what they do, no matter what they endorse, who is to be aware, who is to care? Just lie back and swallow.