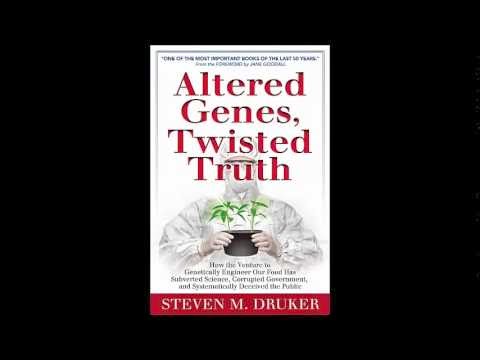 This is not what the GMO industry wanted to see: banner headlines in major newspapers and across the internet exposing the fraud behind GMOs. But this constitutes much more than a PR nightmare. The story behind the headlines shakes the very foundations upon which the industry is built.
‘Altered Genes, Twisted Truth’ is a new book by the US public interest lawyer Steve Druker. The book is the result of more than 15 years of intensive research and investigation by Druker, who initiated a lawsuit against the US Food and Drug Administration (FDA) that forced it to divulge its files on GM foods. Those files revealed that GM foods first achieved commercialisation in 1992 but only because the FDA covered up the extensive warnings of its own scientists about their dangers, lied about the facts and then violated federal food safety law by permitting these foods to be marketed without having been proven safe through standard testing.
If the FDA had heeded its own experts’ advice and publicly acknowledged their warnings that GM foods entailed higher risks than their conventional counterparts, Druker says that the GM food venture would have imploded and never gained traction anywhere.
He also argues that that many well-placed scientists have repeatedly issued misleading statements about GM foods, and so have leading scientific institutions such as the US National Academy of Sciences, the American Association for the Advancement of Science and the UK’s Royal Society.
Druker states that contrary to the claims of biotech advocates, humans have indeed been harmed by consuming the output of genetic engineering. The technology’s first ingestible product (a food supplement of the essential amino acid, L-tryptophan) caused dozens of deaths and seriously sickened thousands of people (permanently disabling many of them). Moreover, the evidence points to the genetic alteration as the most likely cause of the unusual contamination that rendered the supplement toxic.
He explains that laboratory animals have also suffered from eating products of genetic engineering, and well-conducted tests with GM crops have yielded many troubling results, including intestinal abnormalities, liver disturbances, and impaired immune systems.
Druker says:

Eminent environmentalist and anthropologist Jane Goodall has written the foreword to the book and states that Steven Druker is a hero for exposing this massive fraud and is worthy of a Nobel prize for lifting the lid on the truth about GM.
She goes on to state that the industry worked to:

“convince the public and government officials, through the dissemination of false information, that there was an overwhelming expert consensus, based on solid evidence, that the new foods were safe. Yet this, as Druker points out, was clearly not true.”

Goodall adds that the companies have spread disinformation to try and win public support.
She states:

“Druker describes how amazingly successful the biotech lobby has been — and the extent to which the general public and government decision makers have been hoodwinked by the clever and methodical twisting of the facts and the propagation of many myths. Moreover, it appears that a number of respected scientific institutions, as well as many eminent scientists, were complicit in this relentless spreading of disinformation.”

Jane Goodall is best known for her 55-year study of social and family interactions of wild chimpanzees in Gombe Stream National Park, Tanzania. She holds many awards for her environmental and humanitarian work, including the Benjamin Franklin Medal in Life Science, the French Legion of Honour, Japan’s Kyoto Prize and the Tyler Prize for Environmental Achievement.
She describes Druker’s work as one of the most important books of the last 50 years, and adds:

“It will go a long way toward dispelling the confusion and delusion that has been created regarding the genetic engineering process and the foods it creates. Although this book tells a story that’s in many ways distressing, it’s important that it has finally been told because so much confusion has been spread and so many important decision-makers have apparently been deluded.”

Steven Druker gave a press conference in London on Wednesday and has challenged Britain’s Royal Society to apologise for its pro-GM stance and its part in rubbishing scientists who have safety doubts over the crops and food. (Perhaps the likes of Owen Paterson and Anne Glover should too for their role in dismissing legitimate concerns about GMOs, especially Paterson for his recent tirade against critics see this and this.)
His work highlights research which has found tumours, liver and kidney harm in animals given GM feed in trials. And he complains, that researchers who dare to raise these problems have been pilloried.
He said:

With the TTIP having the potential to open the floodgates to allow GMOs into Europe, Pat Thomas, director of the campaigning group Beyond GM, said:

“Steven Druker’s investigation into the history of fraud and deceit that ushered in the era of GM deserves serious consideration before we take actions that will irreversibly alter the European food supply.”