Those who are ready to put their rain gear away in the hopes to enjoy the weather that spring tends to bring might not want to be so hasty. According to the NOAA, an unusually cold and wet winter that has caused deep layers of frozen ground that, when thawed and melted could bring the risk of serious heavy flooding.

Be concerned if your area is experiencing any the following:

Areas at risk are across the Upper Mississippi Basin, Great Lakes region, Ohio River Valley, northern Middle Atlantic, New York and New England has produced an above normal amount of water in the current snowpack and a deep layer of frozen ground much further south than typical. With significant frozen ground in these areas, the flood risk is highly dependent on the amount of future rainfall and the rate of snowmelt this spring. Recent snowmelt has increased the near surface soil moisture and elevated the potential for rapid runoff from rain events. In addition, significant river ice increases the risk of flooding related to ice jams and ice jam breakups. 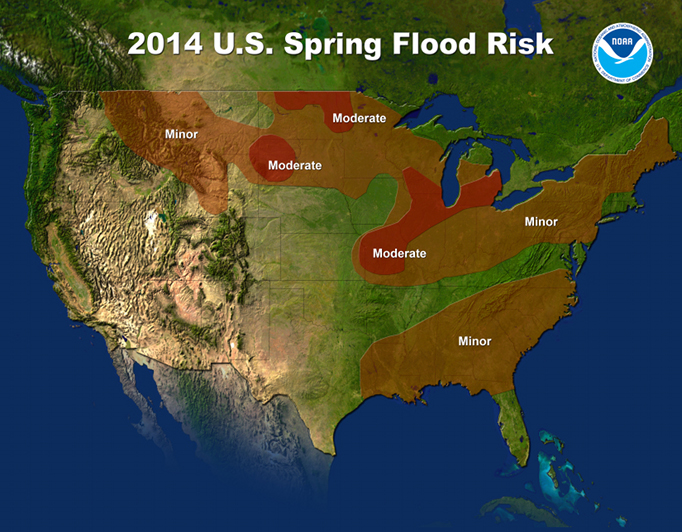 In the report, the NOAA warned of specific rivers at risk that include the Mississippi River between Davenport, Iowa and Burlington, Iowa, the Illinois River between Beardstown, Illinois and Henry, Illinois and many smaller rivers in the area. In addition, a potential for exceeding minor river flood levels exists across the upper Midwest and east into New England.

It won’t take much for heavy flooding to occur in certain areas, so be prepared and have a bug out bag packed for a speedy evacuation.

To prepare for a flood, you should:

If a flood is likely in your area, you should:

90% of the damage related to all natural disasters (excluding droughts) is caused by floods and debris flows. Do what you can to prepare for this type of natural disaster beforehand. This type of disaster can happen very suddenly and the sooner you are able to evacuate the area, the safer you and your family will be.