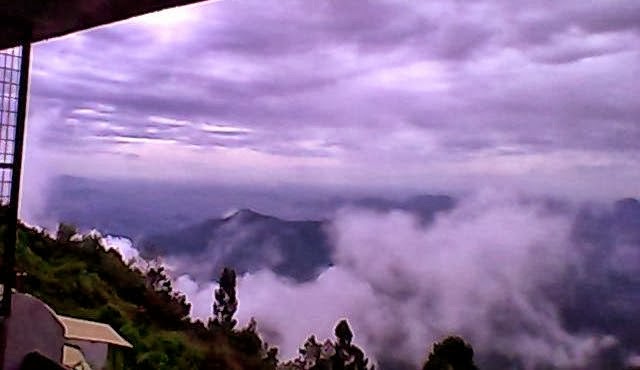 Mountains rise. Fog rolls. The plains below bake. On a plateau at 2,133 metres in the Palani Hills, , Kodaikanal nestles in the mist. It’s a place where eucalyptus trees tower and water spills down rocky mountain facades from cascading streams. A place where cypress, acacia and fruit trees stand next to rhododendron, magnolia and dahlia.
Kodai is one of ’s many ‘hill stations’ that provide respite from the summer heat below. But this station was set up by American missionaries, not the British. It boasts a beautiful, tree-lined, manmade lake and the gloriously laid out botanical gardens, . It is essentially a taste of small town Tamil Nadu with a tourism infrastructure and a famous international school added on. Children of the wealthy, from , the and other parts of , study at . And there is a plush set of restaurants to support staff, students and the richer tourists, which afford Kodai a certain cosmopolitan feel.
Local young women in silk sarees are to be seen walking past trendy western fashion conscious students from the international school and well-to-do tourists from and beyond, fitted out in leggings, kurtas or Lacoste. Shops sell homemade chocolate and plant oils for various remedies. Hotels are scattered around the town, which in its most built up part boasts many quiet, narrow lanes tightly packed with small, concrete box homes and outhouses where kids make their way to or from school, women hang out washing to dry or stray dogs scavenge for food.
Despite the apparent unplanned sprawl across the hillsides, the occasional garish eyesore and the tourists who bring their city habits of horn blurting and boisterousness, Kodai is still genteel by Indian standards. It’s also truly atmospheric when the mist comes rolling in across the mountains and hovers above the lake. With all the lush greenery, the abundance of fruits being grown and the chocolate box cottages dotting the slopes and around the lake, it is easy to appreciate why wealthy people retire here and the international school attracts teachers to come and live here from the US and Europe.
But Kodai is not what it was. Much of the nearby forest has been felled and the vultures, foxes, wild forest chickens and other wildlife have all but disappeared. Locals say that rainfall is not as plentiful now due to water draining from the mountains, which can no longer hold it with the trees gone.
Such a scenario is all too common, especially in where a huge population puts massive stress on the environment. But this is only part of the story because something is much more fundamentally amiss in Kodaikanal.
Mercury rising
In 2001, residents of Kodaikanal uncovered a dumpsite with toxic mercury waste from a thermometer factory run by Unilever’s Indian subsidiary Hindustan Lever. The 7.4 ton stockpile of crushed mercury-containing glass was found in sacks spilling onto the ground in a scrap yard. Unilever had also dumped mercury containing waste in part of the Shola forests within the company’s property. Sholas are hallowed forests because of their high biodiversity and role as watersheds. The findings led to a march to the factory gates by more than 400 residents from the area and marked the beginning of a saga that is still ongoing 12 years later.
The factory closed in 2001 after 18 years of operation.
Air and water-borne mercury emissions have contaminated large areas of Kodaikanal and surrounding areas. A study conducted by the Department of Atomic Energy confirmed that Kodaikanal lake has been contaminated by mercury emissions. The causes were reported to be dispersal of elemental mercury to the atmosphere from improper storage and dispersal to water from surface effluents from the factory.
Moss samples collected from trees surrounding the , located 20 km from the factory, were also tested. Mercury levels were in the range of 0.2 µg/kg, while in Kodaikanal lake the lichen and moss levels were 7.9 µg/kg and 8.3 µg/kg, respectively. Fish samples from Kodaikanal lake also showed mercury levels in the range of 120 to 290 mg/kg.
An environmental audit commissioned by the company admitted that the estimated offsite discharge to the Pambar Shola forests is approximately 300 kg. Additionally, 70 kg were released through airborne emissions.

Just one gram of mercury deposited annually in a lake can, in the long term, contaminate a lake spread over 25 acres to the extent that fish from the lake are rendered unfit for human consumption. Plant workers and Greenpeace

maintain that the company’s figures of mercury discharges to the environment are grossly underestimated.
Hindustan Lever has been accused of considerable legal maneuvering to avoid paying compensation to the ex-workers and their families, many of whom died or became physically handicapped as a result of mercury poisoning.
Responding to claims that mercury exposure in the workplace may have damaged workers’ health, the company conducted a medical check-up in March 2001. It concluded that no workers in the factory suffer from any illness which could be attributed to mercury exposure.
However, a preliminary health survey conducted by two occupational and community health specialists from Bangalore-based Community Health Cell on 30 workers and ex-workers found many people had gum and skin allergy related problems which appeared to be due to exposure to mercury.
More than 1,100 workers worked in the factory during its life-time. From their testimonies, workers appeared to know nothing about the dangers of working with mercury. There was no safety equipment for the workers and neither were there proper facilities to bathe clean after working in the factory. They were not provided with face masks to reduce their intake of mercury in the air and changed uniforms only once every three to four days. Contract workers worked with their bare hands to clean up the mercury. The workers also took home on them particles of mercury that affected the members of their family, including their children.
Workers began to suffer headaches, skin rashes and spinal problems. With no knowledge about mercury, the workers failed to link their illnesses to it. Absenteeism and attrition increased over time.
Once released into the environment, Mercury can cause severe damage to kidney, liver and other vital organs. Exposure on a regular basis can cause skin diseases and damage the eyes. Mercury also affects the nervous system and organic compounds of mercury can cause reproductive disorders and birth defects.
Some 18 ex-workers have died due to illness that can be traced to exposure to mercury. Nine children of former workers have died. Many more workers and their children continue to suffer the effects of mercury poisoning. Miscarriages and children born with congenital ailments and severe mental and physical disorders continue to be reported among the workers and their families.
The fish in Kodaikanal lake are contaminated, and this has caused the loss of livelihood for many people. Water as far as , a major city about 130kms from Kodaikanal, has been contaminated. That’s no surprise because the contaminated water from the mountains was bound to flow onto the plains below.
Levels of mercury in the soil outside the factory indicate an elevation of 25 times over the lowest reading, and 250 times over permissible limits. A Department of Atomic Energy study found mercury levels at 1.32 microgram per cubic metre against the normal level of 0.5-10 nanogram per cubic metre; effectively an aberration of between 132 to 2,640 times.
Conclusion
The Kodaikanal plant began production in 1983 after a mercury thermometer plant owned by Cheseborough Ponds Inc in , closed and relocated to  under the ownership of Ponds India Ltd. In 1998, Ponds India merged with Hindustan Lever, the Unilever subsidiary, which imported the glass and the mercury primarily from the  and exported its thermometers to the US-based Faichney Medical Co. From there, the thermometers went to markets in the ,, ,  and .
In June 2007, the Madras High Court constituted an ‘expert committee’ to decide on the mercury workers’ health claims, which failed to find sufficient evidence to link the current clinical condition of the workers to past mercury exposure in the factory. The saga still drags on today.
While the company has taken limited ‘too-little-too-late’ steps to clean up its former site, the wider environment of course remains contaminated.
On the surface, as you take in the sights, breathe in the mountain air and smell the plant fragrances, Kodai may seem like is a pristine paradise. But here, high in the mountains of Tamil Nadu, there lurks a story that is all too common across the world: the shifting of production involving hazardous materials and methods from Western countries to cheap labour economies, resulting in the exploitation of foreign labour, in both financial and health terms, environmental destruction and flagrant criminality, which is never properly held to account.
It happens because corporations cannot easily get away with such things in their home country, but, for the sake of cutting corners and added profit, think they can in places like . ‘’ arguably being the ultimate example.
It also happens because a blind eye is turned towards corporate greed and criminality that all too often goes under the banner of ‘doing business’ or ‘offshoring’ by corporate executives and corrupt or weak-willed local officials, regardless of the impact on millions of ordinary citizens.
Hindustan Unilever Limited (HUL) is an Indian consumer goods company based in Mumbai. It is owned by Anglo-Dutch company Unilever, which owns a 67% controlling share in HUL. HUL’s products include foods, beverages, cleaning agents and personal care products. A list of its brands are in the Wikipedia link below. One way ordinary people can put pressure on companies for their practices is to draw attention to them by publicising them and to boycott their products, whether, in this instance, it concerns HUL in or Unilever in other countries.
http://en.wikipedia.org/wiki/Hindustan_Unilever