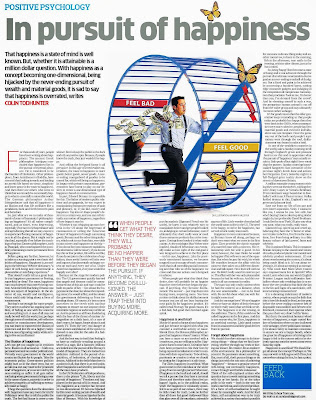 Think of the self-employed artisan who spends a day or a week making something with his or her hands. He or she takes pride in his work — both in the way the work is carried out and in the end product. It’s a form of self-actualisation brought about by meaningful work. And for Karl Marx, self actualization was to be truly achieved in a society that makes it possible for someone to do one thing today and another tomorrow, to hunt in the morning, fish in the afternoon, rear cattle in the evening, criticise after dinner, just as he has a mind.

So, being ‘happy’ then becomes a state of being and is not achieved through the pursuit of an ultimate unattainable elusive goal on a never ending treadmill of drudgery. Not a fixed end point to be achieved by possessing a hundred latest, cutting edge consumer gadgets and indulging in the competition of conspicuous consumption that proclaims ‘look at me, I’m better than you, I’m elevated from the crowd’. And by elevating oneself in such a way, the gregarious human animal is cut off from the wider group and may ultimately become rather unhappy.

It’s for good reason that the older generation keeps reminding us that people today are probably less happy than they were back in the 1950s, when communities were more cohesive, people had less material goods and excessive individualism was not rampant. Once the genie was out of the bottle and people’s aspirations went through the roof, disillusionment was bound to take a hold.
As one of the wealthiest countries in the world, take a Sunday morning stroll through England’s green and pleasant land to see this and to appreciate what the pursuit of ‘happiness’ may actually result in. Stale pools of last night’s beer-vomit clog the gutters. Sunday morning booze-soaked hangovers fuzz memories of the previous night’s deeds done and actions best forgotten. Every Saturday night is a full-fledged grim reality show on the streets of downtown .
A million wannabe young women wishing they were not themselves, wishing they were Jenny Lopez or Victoria Beckham. From minimum wage beautician to footballer’s wife in an X-Factor instant. Vodka fuelled dreams in this, ’s not so green and pleasant land.
Save me from my life of low pay and even lower aspiration, Vicky. I wanna be like you, I wanna be you. Sex sells, but whose buying? Some coked-up drug dealer might do, but preferably David Beckham. I could be the next ‘Posh’, if I give you what you want, what you really, really want.
Glammed up, spiced up and sexed up, believing they have ‘x’ factor or whatever it takes to be free, free from the mundane, free from being ordinary in a fake fantasy culture of ‘girl power’, fame and celebrity.
This is aspirant . This is comatose  sleeping to the sounds and visions of media-produced plastic role models and celebrity product endorsement. It’s not about overthrowing the system, it’s about being made blind to it. It’s not about rejecting it, it’s about accepting it as normality. Who reads Karl Marx when Cosmo says empowerment lies in lipstick? Who needs Lenin when you can watch English Premier League multi-millionaire footballers whose only revolting duty is to endorse the very products that bind the fan to the lies and logos of a narcissistic, self-incarcerating consumerism?
It is a damning indictment of modern society, where people accept the faith that this is how life should be lived, as they pray before the never ending conveyor belt of disposable commodities and heroes to be fetishised, consumed then spat out when they pass their very short sell by dates.
But this is the unethical hamster wheel version of happiness, a sugar coated fun-fare of hedonism where no one is allowed to be unhappy, where politicians constantly lie about reality to maintain consensus to ensure we are a happy bunch, where the great lie of happiness of striving to be happy is fed to the masses only to be violently spat out onto the streets come every Saturday night.
Happiness is unethical? We should forget all about the concept? Perhaps so. We may not wish to fully agree with Zizec, but somewhere along the line, he has a point.