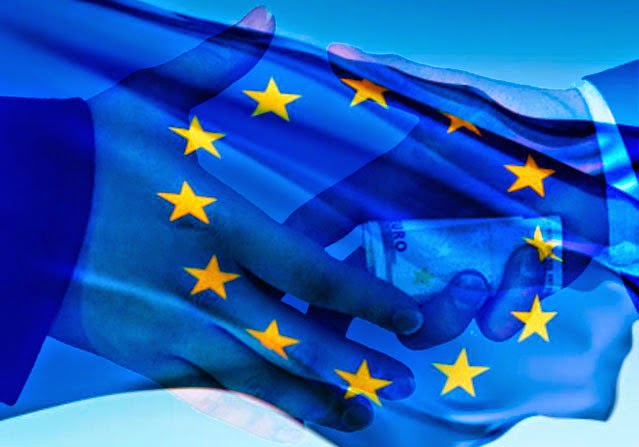 Countercurrents 16/5/2014 and Global Research 17/5/2014
On Thursday 15 May, farmers, trade unions and citizens belonging to the D1920 Alliance (1) and Alter Summit (2) tried to shut-down ‘ biggest corporate lobbying event in protest at big business dictating European policy. The surrounding of the European Business Summit (3) marked the beginning of a period of action across   (4) against austerity policies and the corporate hijack of decision and policy-making processes within the EU.
The   is regarded by many as a corporate lobbying event where future policies are decided prior to upcoming regional, national and European elections.
In response to the police arresting innocent citizens en-masse during the protest, Pascoe Sabido from Corporate Europe Observatory said:

“Once again we have seen that the priorities of big business are placed above those of  ‘s citizens. It’s simply not acceptable to arbitrarily arrest peaceful protestors for trying to make their voices heard above the billions of dollars spent by multinational corporations on lobbying. Democracy is truly broken and it doesn’t appear like our political leaders are in any hurry to fix it.”

The reasoning behind the protest was explained by Rudy Janssens from Belgian public services trade union CGSP:

“Citizens have had enough of a   made for high profits and social misery. Shutting down this lobbying jamboree is sending a clear message that democracy is not for sale at any price. We demand a   from below.”

In the run up to the European elections in ten days’ time, citizens, social movements, trade unions, migrants, youth, women and precarious workers will be taking to the streets in protest in  Italy , France ,  Spain ,  Greece ,  Germany ,  Denmark  and elsewhere.
Noemi Costa from the Coalizione Centri Sociale and the Blockupy International Coordinating Committee said:

“By being here today we’ve shown that solidarity beyond borders is necessary and possible. This is another step in building a trans-European movement to fight back against the neo-liberal crisis policies coming out of  . Up until the elections we will be in the streets, demanding the   that we really want.”

The protests come on the back of a report that declares the European Commission to be a “disgrace to the democratic traditions in  .” (5) The report’s authors looked at policy areas across the board, including free trade agreements, finance, climate change, food and agriculture, water privatization and economic policy. In all areas, the authors note that  the Commission has eagerly pursued a corporate agenda and has pushed for policies in sync with the interests of big business.
The report flagged up various issues that have been highlighted in recent months, such as secrecy, lack of transparency and unaccountable lobbying and policy making (6,7), attempts to bypass democratic institutions to institute economic plunder by powerful corporations (8,9), the implementation of corporate-driven agendas concerning free trade negotiations (10), massive conflicts of interests within regulatory bodies (11), the corrupt austerity agenda (12) and the huge, insidious presence and influence of finance-sector interests in Brussels (13).
FelipÃ© Van Keirsbilck from Belgian trade union CNE added:

“Why are we still letting those who caused the crisis decide how we respond to it? Banks and big business, rather than taking responsibility for wrecking the economy, have passed the cost on to ordinary citizens who have watched as compliant governments demolish public services and people’s ability to earn a living. We don’t owe so why should we pay? We need an alternative to austerity.”

“Rather than looking for solutions to the crisis in the interest of citizens, our so-called political leaders like EU trade Commissioner Karel De Gucht are trying to make big business even richer through secretly negotiated transatlantic trade deals. And again its citizens and producers who will suffer, with deregulation seeing public services sold off while dangerous foods make their way to a plate near you. Who wants to eat hormone-filled beef or chlorine-washed chicken?”

Images of the protest can be viewed here:
https://www.flickr.com/photos/corporateeuropeobservatory/sets/72157644682753134/
Notes
1) D1920 Alliance is a non-partisan alliance of citizens, farmers and trade unions who fight against the neo-liberal policies of austerity and free trade.
2) Alter Summit a coalition of numerous trade unions and social movements across   fighting for a democratic, social and feminist  .
3) The European Business Summit 2014, organised by the European employers’ association, BusinessEurope, is  ‘ biggest lobbying event where corporate CEOs enjoy unrivaled access to European Commissioners and political leaders. A few of this year’s speakers include Commission President JosÃ© Manuel Barroso, EU Trade Commissioner Karel De Gucht, FlemishMinister-President Kris Peeters, Belgian Deputy Prime Minister Didier Reynders, alongside the CEOs from General Electrics, Accenture and Marcegaglia, Presidents of the Federation of Belgian Employers (FEB), L’Oreal and Bristol-Myers Squibb.
4) The European Week of Action is happening across the continent between the 15-25 May. For information on any of the actions see www.mayofsolidarity.org .
5)  http://corporateeurope.org/sites/default/files/record_captive_commission.pdf
6)  http://www.globalresearch.ca/us-eu-transatlantic-free-trade-agreement-more-secrecy-and-more-duplicity-revealed/5369272
7)  http://www.globalresearch.ca/the-great-eu-india-corporate-heist-uncovering-the-free-trade-agenda/5342267
8)  http://www.globalresearch.ca/free-trade-agreements-the-bypassing-of-democracy-to-institute-economic-plunder/5354197
9)  http://corporateeurope.org/sites/default/files/profiting_from_crisis.pdf
10)  http://www.globalresearch.ca/the-us-eu-transatlantic-free-trade-agreement-tafta-big-business-corporate-power-grab/5352885
11) http://corporateeurope.org/efsa/2013/10/unhappy-meal-european-food-safety-authoritys-independence-problem
12)  http://corporateeurope.org/eu-crisis/2013/03/businesseurope-and-economic-governance
13)  http://corporateeurope.org/financial-lobby/2014/04/fire-power-financial-lobby