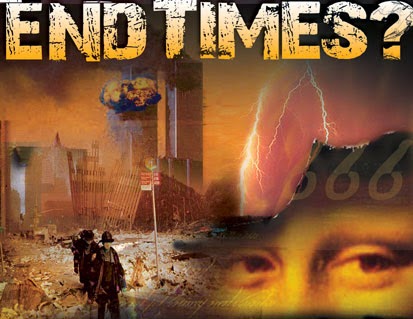 In September 2013, a poll was conducted where an amazing percentage, 41 percent of U.S. adults, 54 percent of Protestants and 77 percent of evangelicals, said they believed what we are seeing throughout the word are the signs of biblical end times.

In the videos seen below, different types of events are shown that explains why so many are so convinced that we are living out our last days on Earth.

Across the world we see Christians being persecuted, slaughtered, hatred, bestiality, religious deceivers and what many call demons, such evil on a scale so large that one doesn’t have to be religious or practice any particular religion to watch in horror as the headlines fill their screen.

WARNING- While there is no pornography seen in the video below, it is just as disturbing to watch example after example of the growing evil that explains why so many in the article linked at the beginning believe what is being seen are prophetic signs that we are living in the end times.

To the viewer, please be advised: NONE of the images or content are for children or the faint of heart. During this presentation you may feel the sudden urge to bring up your last meal, so keep a vomit bucket close to you. You will most likely feel emotions such as anger, sadness and for others frustration and loss of all hope, but in the end, we know as believers that we are the winners because of the birth and the perfect life of Jesus Christ, his death on an old rugged cross and His resurrection from the dead. Jesus Christ is alive today and forever, so please keep in mind, nothing that you see in this video is not at all new but has happened before in the past and is also why that in God’s word Jesus says ” as it was in the days of Noah, so shall it be when the son of man returns”. God has everything under His control and we have seen the end of the book, I don’t know about you but that gives me real hope:)

In the second video below, the uploader shows a different set of examples which the videographer believes are also prophetic signs of the end of the world.