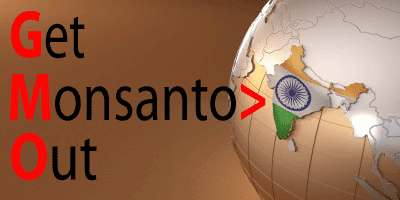 Before being voted out of office this year, the Congress-led United Progressive Alliance administration sanctioned open-field trials of 200 GM food crops in . Monsanto’s shares rocketed as a result (1). This decision prompted Rajesh Krishnan of the Coalition for a GM Free India to state that government was against the interest of citizens, farmers and the welfare of the nation. Instead, it has decided to work hand in glove with the multinational GM seed industry that stands to gain immensely from the numerous open field trails of GM crops.
Filmmaker Mahesh Batt called Minister Moily, who sanctioned the decision, a “corporate mole” and the Coalition for a GM Free India and Greenpeace condemned Moily’s action as “unscientific, anti-people and reeking of vested interests.”
Moily’s decision was set against the backdrop of the Supreme Court appointed Technical Expert Committee (TEC) recommending a ten-year moratorium on GM organism approvals till scientifically robust protocols, independent and competent institutions to assess risks and a strong regulatory system were developed. It recommended an indefinite stoppage of all open field trials of GM crops. The Committee insisted that the government bring in independence, scientific expertise, transparency, rigour and participative democracy into GMO regulation and policy.
Environmentalist Aruna Rodrigues points out the risks and drawbacks of GMOs by stating that there is increasing evidence of the health and environment risks from these crops; GM yields are significantly lower than yields from non-GM crops; and pesticide use, the great ‘industry’ claim on these GM crops, instead of coming down, has gone up exponentially. Rodrigues argues that in , notwithstanding the hype of the industry, the regulators and the Ministry of Agriculture (MoA), Bt cotton yield is levelling off to levels barely higher than they were before the introduction of Bt (2).
Rodrigues wants to know where is the advantage and why are we experimenting given all the attendant risks. We have hard evidence from every UN study and particularly the World Bank-funded International Assessment of Agricultural Knowledge and Science for Development Report, which  signed in 2008.
She adds:

“The IAASTD was the work of over 400 scientists and took four years to complete. It was twice peer reviewed. The report states we must look to small-holder, traditional farming (not GMOs) to deliver food security in third world countries through agri-ecological systems which are sustainable. Governments must invest in these systems. This is the clear evidence.”

The MoA strongly opposed the TEC Committee’s report. This, according to Rodrigues, was to be expected given the conflict of interests:

“The Indian Council of Agriculture Research (ICAR) promotes public-private-partnerships with the biotechnology industry. It does this with the active backing of the Ministry of Science and Technology. The MoA has handed Monsanto and the industry access to our agri-research public institutions placing them in a position to seriously influence agri-policy in . You cannot have a conflict of interest larger or more alarming than this one. Today, Monsanto decides which Bt cotton hybrids are planted and where. Monsanto owns over 90 per cent of planted cotton seed, all of it Bt cotton.”

All the other staggering scams rocking the nation do have the possibility of recovery and reversal, but, as Rodrigues argues, the GM scam will be of a scale hitherto unknown:

“We have had the National Academies of Science give a clean chit of biosafety to GM crops – doing that by using paragraphs lifted wholesale from the industry’s own literature! Likewise, ministers who know nothing about the risks of GMOs have similarly sung the virtues of Bt Brinjal and its safety to an erstwhile Minister of Health. They have used, literally, “cut & paste” evidence from the biotech lobby’s “puff” material. Are these officials then, “un-caged corporate parrots?”

Arun Shrivastava notes that as early as 2003, when the first ever Bt cotton crop was harvested in Andhra Pradesh and , Gene Campaign evaluated the performance of Bt Cotton (3). These studies proved that GE seeds don’t increase yield. He goes on to note that the impleadment to ban GMOs was backed by 6.5 million farmers through their respective associations. It was admitted by the Supreme Court in April 2007 and contains a long list of hard scientific evidences.
Shrivastava states that the Standing Committee on Agriculture in Parliament unanimously and unequivocally concluded that GE seeds and foods are dangerous to human, animal and environmental health and directed the Government of Manmohan Singh to ban GMOs. The 400-page report was submitted to Parliament in October 2012 (4).
As is the case in the UK (5), officialdom in India is working closely with global biotech companies to force GMOs into fields and onto the public, despite evidence pertaining to the deleterious impacts of GMOs on various levels (6,7,8). These companies are in fact playing a key role in determining the overall development agenda for  (9,10,11).
New report attacks anti-GMO activists and organisations
Given the evidence pertaining to the risks and efficacy of GMOs, organisations and activists opposing such crops are being singled out for putting a break on development and growth and for being in the pocket of foreign interests.
A recent Intelligence Bureau (IB) leaked report, ‘Impact of NGOs on Development’, has a special section on GMOs and is clearly supportive of the introduction of GM crops into Indian agriculture. The IB said foreign NGOs and their Indian arms were serving as tools to advance Western foreign policy interests in various areas, of which GMOs comprise one aspect.
In response to the report, Aruna Rodrigues, Vandana Shiva and Kavitha Kuruganti, who were all mentioned in the report, released a statement that turned the tables on the IB by saying that it is conspiring with global corporate interests to haemorrhage India’s agricultural economy (12). The report quotes Dr Ronald Herring of Cornell University, who is a known promoter of genetically-modified organisms and Monsanto’s monopoly. Speaking to The Statesman newspaper in India, Aruna Rodrigues said:

“Here is a real foreign hand that informs the IB report. Cornell University, where Dr Herring works, was one of the main forces, along with USAID and Monsanto, behind the making of Bt brinjal in India.” (13)

Their joint statement goes on to say:

“… the biggest foreign hand by ‘STEALTH’ and official ‘COVER-UP’ will be in GMOs/GM crops if introduced into Indian agriculture. All that stands between a corporate takeover of our seeds and agriculture is the committed and exemplary work by the not-for-profit sector… In conspiring with deeply conflicted institutions of regulation, governance and agriculture… to introduce GM crops into India, the IB will in fact aid the hand-over of the ownership of our seeds and foods to multi-national corporations. This will represent the largest take-over of any nation’s agriculture and future development by foreign-hands… (and)… will plunge India into the biggest breach of internal security; of a biosecurity threat and food security crisis from which we will never recover…. GM crops have already demonstrated no yield gain, no ability to engineer for traits of drought, saline resistance etc and have some serious bio-safety issues which no regulator wishes to examine.”

The statement says that India’s Bt cotton is an outstanding example of the above scenario:

“This ‘VALUE CAPTURE’ for Monsanto which was contrived and approved by our own government mortgaging the public interest has ensured that in a short 10 years, 95% of cotton seeds in the form of Bt cotton are owned by Monsanto… It is Monsanto now that decides where cotton should be planted and when by our farmers… The Royalties accruing to Monsanto that have been expatriated are approximately Rs 4800 Crores in 12 years, (excluding other profit mark-ups)… The IB is thus conspiring with global corporate interests to hemorrhage India’s agricultural economy… We call for an investigation on the foreign influence in writing the GMO section in the IB report.”

“If India’s intelligence agencies become instruments of global corporations working against the public interest and national interest of India, our national security is under threat. This IB report is deeply anti-national and subversive of constitutional rights of citizens in our country. It does India no credit.”

Criminalising dissent
The leaked IB report has been sent to the Prime Minister’s Office, the Home Minister, the National Security Adviser, the Finance Minister and others. Apart from attacking those campaigning against GMOs, the report accuses Greenpeace and other groups of receiving foreign funds to damage economic progress by campaigning against power projects and mining.
The IB is India’s domestic spy service and garners intelligence from within India and also executes counter-intelligence and counter-terrorism tasks. Its report attempts to portray certain NGOs and activists as working against the ‘national interest’ and being in the pay of foreigners. Discrediting certain sections of civil society as being ‘unpatriotic’, by working to undermine some bogus notion of the ‘national interest’, always sits well with ruling elites that are all too ready to play the nationalist card to garner support. Yet, in this case the report itself sides with powerful foreign corporations and, as far as GMOs are concerned, their agenda to secure control over Indian agriculture. Whose interest does that serve?
Those who are exercising their democratic right to challenge and protest corporate-driven policies that are all too often based on staggering levels of corruption and rampant cronyism (14) – and are thus non-transparent and secretive – are being discredited and smeared in the report. However, this should come as no surprise. Various nation states have used their intelligence agencies to monitor, subvert and undermine grass-root activists and civil organizations that have (by acting legitimately and within the law) attempted to hold power holders to account (15). Governments the world over have a tendency to dislike genuine democracy and transparency.
Greenpeace India was singled out for particular criticism in the report and has responded by saying:

“We believe that this report is designed to muzzle and silence civil society who raise their voices against injustices to people and the environment by asking uncomfortable questions about the current model of growth.” (16)

Massive human rights abuses, violent oppression and the trampling of democracy in order to push through various industrial projects have been a feature of various administrations in recent decades (17). The clamping down on funding for NGOs and attempts to dampen dissent is nothing new. But the leaking of the IB report is timely. The new Modi administration seeks to speed up projects and the opening of India’s economy to private interests and to more fully embrace the tenets of neo-liberal economic doctrine (18). The report signals that even tougher times lie ahead for civil society and ordinary people who seek to hold officialdom to account as it continues to acquiesce to powerful corporate interests.
Notes
1)      http://www.business-standard.com/article/news-cm/monsanto-india-spurts-21-in-two-sessions-114030300632_1.html
2)      http://www.thehindu.com/opinion/lead/nip-this-in-the-bud/article5012989.ece#comments
3)      http://www.globalresearch.ca/india-the-devastating-social-impacts-of-gmo-killer-seeds/5372919
4)      “Cultivation of Genetically Modified Food Crops,” Committee on Agriculture, 37th Report, August 2012. Summary of the report: http://www.gmwatch.eu/index.php/report-on-gm-crops-and-food-security-from-india-s-parliamentary-standing-committee-on-agriculture
5)      http://www.globalresearch.ca/monsanto-syngenta-and-bayer-cropscience-the-gmo-biotech-sector-cant-win-the-scientific-debate-the-options-are-co-option-deception-and-collusion/5381725
6)      http://www.globalresearch.ca/the-realities-of-gmo-and-petro-chemical-agriculture-allergies-toxins-new-diseases/5367760
7)      http://www.globalresearch.ca/potential-health-hazards-of-genetically-engineered-foods/8148
8)      http://www.twnside.org.sg/title2/susagri/2013/susagri272.htm
9)      http://dissidentvoice.org/2009/07/monsanto-a-contemporary-east-india-company-and-corporate-knowledge-in-india/
10)  http://www.thehindu.com/todays-paper/walmart-and-monsanto-on-indous-agriculture-initiative-board/article3176462.ece
11)  http://www.bhoomimagazine.org/article/cash-food-will-strike-very-foundation-economy
12)  https://kavithakuruganti.wordpress.com/2014/06/17/foreign-hand-in-the-ib-report-joint-statement-from-vandana-shiva-aruna-rodrigues-kavitha-kuruganti/
13)  http://www.thestatesman.net/news/60290-timing-of-leakage-questioned.html
14) http://www.countercurrents.org/peebles020514.htm
15)  http://www.globalresearch.ca/government-spying-has-always-focused-on-crushing-dissent-not-on-keeping-us-safe/5342018
16)  http://www.reuters.com/article/2014/06/12/india-projects-idUSL4N0OT2XF20140612
17) http://www.countercurrents.org/psc270412.htm
18) http://www.globalresearch.ca/the-transatlantic-trade-and-investment-partnership-a-thatcherite-revolution-free-trade-corporate-plunder-and-the-war-on-working-people/5386784