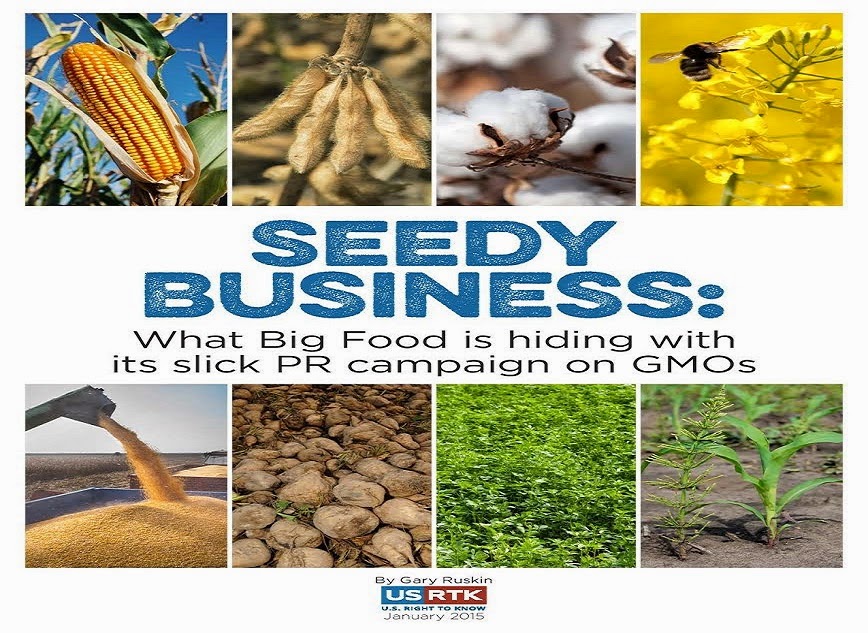 RINF 21/2/2015, Countercurrents 22/2/2015, Global Research 23/2/2015
A recent report by US Right to Know (‘Seedy Business: What Big Food is Hiding with Its Slick PR Campaign on GMOs’, see here) outlines how agrichemical firms have spent more than $100 million since 2012 on political and PR campaigns to shift the media narrative on GMOs. The non-profit food research group is now calling on media to accurately report that the science on GMOs is contradictory and has been largely controlled by corporations that profit from GMO seeds and the pesticides that go with them.
Stacy Malkan, media director of US Right to Know says:

“Unfortunately, many members of the media, and even some scientists, have been snookered by PR firms about a supposed scientific consensus on GMOs that doesn’t exist.”

Part of the PR campaign takes place on prominent websites that forward the notion that the debate on GMOs has been settled. The claim is based on the premise that there is a consensus on GMO safety within the ‘scientific community’, which has been fuelled by the results of two much publicised ‘big list’ reviews that supposedly give GMOs the green light on safety.
According to the first review by Nicolia and colleagues, some 1,700 studies show GMOs are safe for human and animal health and the environment. The second review is promoted on the claim that trillions of GMO meals eaten indicate that there is no health risk to food producing animals or humans.
Despite the claims, those 1,700 studies do not indicate that GMOs are safe (see here to discover that many even indicate risks: GMO Myths and Truths (pp. 102—126.). Moreover, the methodology, evidence and conclusions from the ‘trillion meal’ review have been deconstructed to reveal that it too shows nothing of what the pro-GMO lobby claims it does (see here). In fact, the review has been described as ‘junk’.
These ‘big list’ reviews are being used for the purpose of pro-corporate PR spin passed off as sound science by a lobby group that constantly attacks its critics for relying on emotion, ideology and lies. However, as documented here and here, it is the pro-GMO lobby that engages in such tactics by distorting and censoring science, capturing regulatory bodies, attacking scientists whose findings are unpalatable to the industry and bypassing proper scientific and regulatory procedures altogether.
Similarly, US Right to Know’s report ‘Seedy Business’ shows how science can be swayed, bought or biased by the agrichemical industry in many ways, such as suppressing adverse findings, harming the careers of scientists who produce such findings, controlling the funding that shapes what research is conducted, the lack of independent US-based testing of health and environmental risks of GMOs and tainting scientific reviews of GMOs by conflicts of interest.
The pro-GMO lobby is engaged in a propaganda crusade carried out on the web and in the print media by slick media communications personnel or scientists who promote themselves as ‘objective’ when nothing could be further from the truth in certain cases (for example, see this and this).
Making grandiose statements based on gross misrepresentations that are guaranteed to grab media headlines on the back of ‘big list’ reviews are designed to play on the public’s ignorance.

“Assembling big lists of studies supposedly providing overwhelming evidence of the safety of GMOs has become common practice by GMO proponents… The success of the tactic depends on the reading public failing to examine the actual studies and seeing what they say.” Claire Robinson (here).

In challenging the ‘scientific’ claims of the pro-GMO lobby, Claire Robinson adds:

“… authors should re-learn the basic scientific principle of citing a specific data point to support each claim they make about GMO safety. The problem for them is that doing so would cause their entire house of cards to collapse.”

US Right to Know urges people to read a January 24 statement published in the journal Environmental Sciences Europe, which has been signed by 300 scientists, physicians and scholars that asserts there is no scientific consensus on the safety of GMOs (see here).
This statement says that the claim of scientific consensus on GMOs frequently repeated in the media is “an artificial construct that has been falsely perpetuated” to propagate the belief that debate on the topic is “over.” That claim “…is misleading and misrepresents or outright ignores the currently available scientific evidence and the broad diversity of scientific opinions among scientists on this issue,” according to the statement.
The statement goes on to make numerous important points, including:
1) There are no epidemiological studies investigating potential health effects of GMO food on human health. With no epidemiological studies, claims that “trillions of GMO meals” have been eaten with no ill effects have no scientific basis.
2) GMO studies are frequently mischaracterized as showing safety. For example, the EU Research Project, which has been internationally cited as providing evidence of GMO safety, was not designed to test safety and provides no reliable evidence of safety. Another example is the false claim that “hundreds of studies” listed on the biotechnology website Biofortified demonstrate GMO safety. In fact, many of the studies on that list do not address safety concerns at all and several of the studies raise serious concerns.
3) The Cartagena Protocol on Biosafety and UN’s Codex Alimentarius share a precautionary approach to GMO crops and foods, in that they agree that genetic engineering differs from conventional breeding and that safety assessments should be required before GM organisms are used in food or released into the environment.
4) Claims that government and scientific organizations endorse safety are often exaggerated or inaccurate. For example, an expert panel of the Royal Society of Canada said it is “scientifically unjustifiable” to presume that GM foods are safe without rigorous scientific testing.
5) A report by the British Medical Association concluded that “many unanswered questions remain” about the long-term effects of GMOs on human health and the environment and that “safety concerns cannot, as yet, be dismissed completely on the basis of information currently available.”
6) There is no consensus on environmental impacts of GMOs, and many concerns have been raised about increased herbicide use, potential health impacts and the rapid spread of herbicide-resistant weeds.
The joint statement concludes:

“…the totality of scientific research outcomes in the field of GM crop safety is nuanced; complex; often contradictory or inconclusive; confounded by researchers’ choices, assumptions, and funding sources; and, in general, has raised more questions than it has currently answered… [Decisions on whether to continue and expand GMO crops should] be supported by strong scientific evidence… obtained in a manner that is honest, ethical, rigorous, independent, transparent, and sufficiently diversified to compensate for bias… [rather than based on] misleading and misrepresentative claims by an internal circle of likeminded stakeholders that a ‘scientific consensus’ exists on GMO safety.”

For a comprehensive overview of the myths and misrepresentations forwarded by the pro-GMO lobby and the actual reality of the situation, consult this report:
GMO Myths and Truths: An evidence-based examination of the claims made for the safety and efficacy and of GM crops and foods
Also see from IndiaGMInfo:
Adverse impacts of transgenic crops: a compilation of scientific references with abstracts