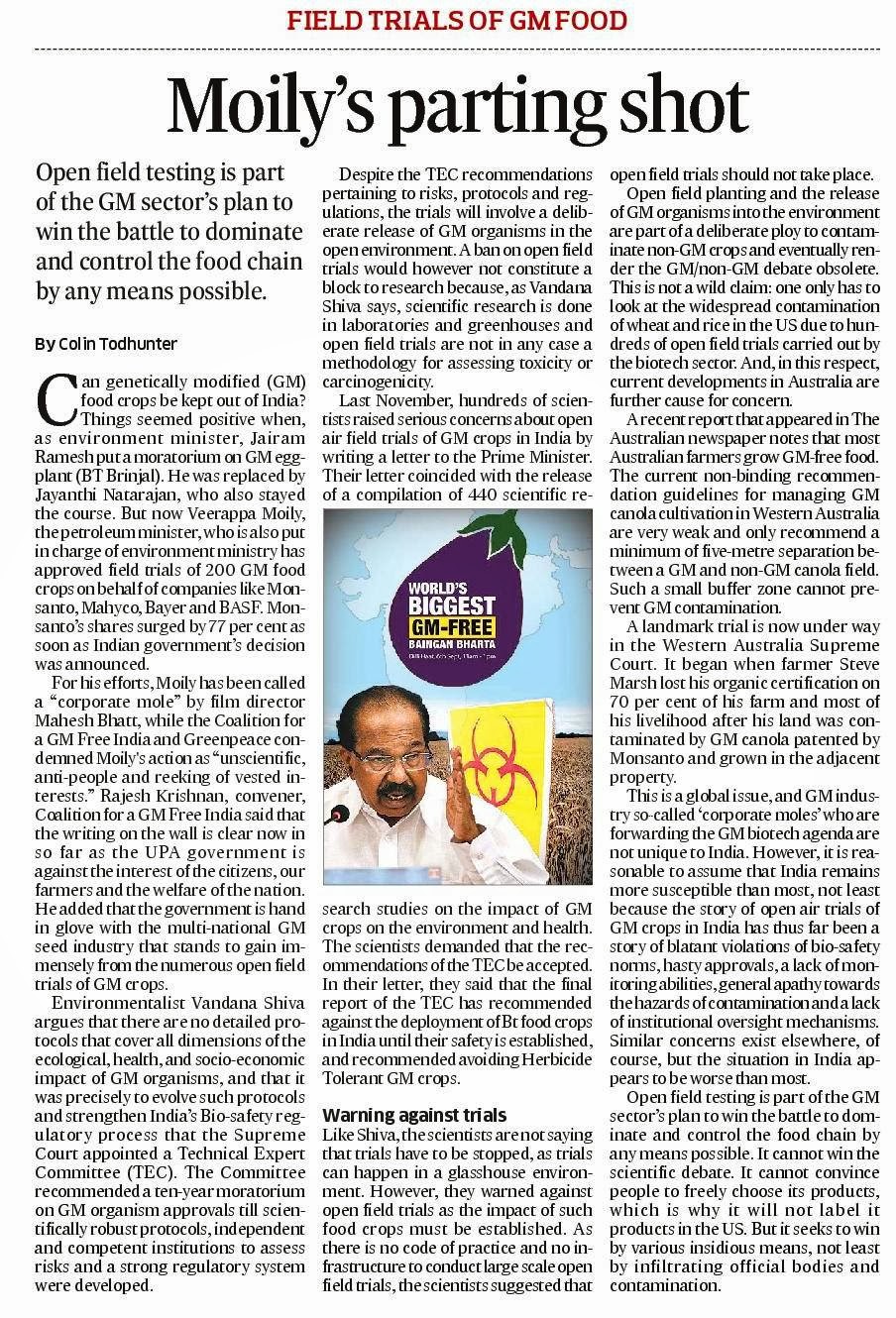 Can genetically modified (GM) food crops be kept out of ? Things seemed positive when, as Environment Minister, Jairam Ramesh put a moratorium on GM eggplant (BT Brinjal). However, he has now been replaced. ’s Oil Minister, is now also ’s new Environment Minister. Oily has approved field trials of 200 GM food crops on behalf of companies like Monsanto, Mahyco, Bayer and BASF. Monsanto’s shares surged by 77 percent as soon as Moily’s decision was announced.

For his efforts, Oily has been called a “corporate mole,” (1) and the Coalition for a GM Free India and Greenpeace condemned Moily’s action as “unscientific, anti-people and reeking of vested interests.”
Rajesh Krishnan, convener, Coalition for a GM Free India said:
“The writing on the wall is clear now. The UPA government is against the interest of the citizens, our farmers and the welfare of the nation. It is hand in glove with the multi-national GM seed industry that stands to gain immensely from the numerous open field trails of GM crops.”
Environmentalist Vandana Shiva argues that there are no detailed protocols that cover all dimensions of the ecological, health, and socio-economic impact of GM organisms (2) and that it was precisely to evolve such protocols and strengthen ’s Bio-safety regulatory process that the Supreme Court appointed a Technical Expert Committee (TEC). The Committee recommended a ten-year moratorium on GM organism approvals till scientifically robust protocols, independent and competent institutions to assess risks and a strong regulatory system were developed.
Despite the TEC recommendations pertaining to risks, protocols and regulations, the trials will involve a deliberate release of GM organisms in the open environment. A ban on open field trials would however not constitute a block to research because, as Vandana Shiva says, scientific research is done in laboratories and greenhouses and open field trials are not in any case a methodology for assessing toxicity or carcinogenicity.
Last November, hundreds of scientists raised serious concerns about open air field trials of GM crops in  by writing a letter to the Prime Minister. Their letter coincided with the release of a compilation of 440 scientific research studies on the impact of GM crops on the environment and health (3). The scientists demanded that the recommendations of the TEC be accepted. In their letter, they said that the final report of the TEC has recommended against the deployment of Bt food crops in  until their safety is established, and recommended avoiding Herbicide Tolerant GM crops.
Like Shiva, the scientists are not saying that trials have to be stopped, as trials can happen in a glasshouse environment. However, they warned against open field trials as the impact of such food crops must be established. As there is no code of practice and no infrastructure to conduct large scale open field trials, the scientists suggested that open field trials should not take place.

Open field planting and the release of GM organisms into the environment are part of a deliberate ploy to contaminate non-GM crops and eventually render the GM/non-GM debate obsolete. This is not a wild claim: one only has to look at the widespread contamination of wheat and rice in the

due to hundreds of open field trials carried out by the biotech sector and similar concerns about contamination in India (4).
And, in this respect, current developments in  are further cause for concern.
A recent report (5) that appeared in The Australian newspaper notes that most Australian farmers grow GM-free food. The current non-binding recommendation guidelines for managing GM canola cultivation in  are very weak and only recommend a minimum of five-metre separation between a GM and non-GM canola field. Such a small buffer zone cannot prevent GM contamination.
A landmark trial is now under way in the Western Australia Supreme Court. It began when farmer Steve Marsh lost his organic certification on 70 percent of his farm and most of his livelihood after his land was contaminated by GM canola patented by Monsanto and grown in the adjacent property.
This is a global issue, and GM industry ‘corporate moles’ who are forwarding the GM biotech agenda are not unique to  (6,7). However, it is reasonable to assume that India remains more susceptible than most, not least because the story of open air trials of GM crops in India has thus far been a story of blatant violations of bio-safety norms, hasty approvals, a lack of monitoring abilities, general apathy towards the hazards of contamination and a lack of institutional oversight mechanisms (8,9,10). Similar concerns exist elsewhere, of course, but the situation in India appears to be worse than most.
Open field testing is part of the GM sector’s plan to win the battle to dominate and control the food chain by any means possible. It cannot win the scientific debate (11). It cannot convince people to freely choose its products (12). But it seeks to win by various insidious means, not least by infiltrating official bodies and contamination – by all means necessary (13).
Notes
1) http://www.navdanya.org/blog/?p=683
2) http://timesofindia.indiatimes.com/Filmmaker-Mahesh-Bhatt-calls-Veerappa-Moily-a-corporate-mole/articleshow/31215130.cms
3) http://timesofindia.indiatimes.com/india/Scientists-write-to-PM-against-open-field-trials-of-GM-crops/articleshow/26167566.cms?referral=PM
4) http://www.globalresearch.ca/contamination-and-bio-pollution-the-criminality-of-the-gm-biotech-iindustry/5371517
5) http://gmwatch.org/index.php/news/archive/2014/15336-does-the-biotech-industry-have-a-right-to-contaminate-farmers-fields
6) http://www.countercurrents.org/todhunter090713.htm
7) http://gmwatch.eu/index.php/news/archive/2014/15308-eu-chief-science-adviser-s-gmo-safety-claims-are-a-lie
8) http://indiagminfo.org/?page_id=175
9) http://www.globalresearch.ca/the-death-of-rice-in-india/9562
10) http://www.downtoearth.org.in/content/india-denies-gmo-contamination-basmati
11) http://covvha.net/100-scientific-study-links-on-the-health-risks-of-gmos/#.Uww6cuNdWSr
12) http://www.gmeducation.org/government-and-corporations/p213501-uk-citizens-continue-to-reject-gmo-food-and-even-farmers-don-t-want-to-eat-it.html
13) http://www.countercurrents.org/todhunter030613.htm