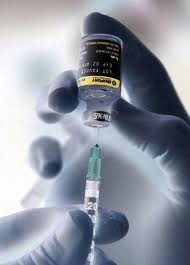 A bill currently being debated in Colorado would force parents who attempt to opt out by seeking a personal exemption from getting their kids vaccinated, “to watch a video that discusses the benefits and risks of immunization to the student,” according to ABC 7News Denver.

Not everyone thinks subjecting people to government propaganda just so they are allowed to make their own decisions about what’s injected into their children is a good idea:

Susan Lawson testified against the bill, recalling how her daughter suffered brain injuries seven years ago after taking a vaccine to prevent measles, mumps and rubella when she was one year old.

“It’s about choice and it’s about not pressuring and using coercion to get parents to do what the government wants them to do, which is to vaccinate,” Lawson told 7NEWS.

Many parents are wary of shooting a cocktail into their children that contains a wide range of ingredients including antibiotics, formaldehyde, monosodium glutamate (MSG), bovine fetal tissue, polysorbate and heavy metals like aluminum and the mercury-containing preservative thimerosal — all for a disease the child might not even contract.

And as I have previously reported, pro-vaccine propaganda is actually backfiring in studies, leaving the people subjected to it even less inclined to want to get their children or themselves vaccinated than they were before.

Despite what the CDC would have everyone believe, ample evidence suggests vaccines can and do cause injury – the existence of our county’s National Vaccine Injury Compensation Program, which has paid out a total of almost $3 billion in damages to victims since the first claims were filed in 1989, is proof enough of that.

America has the most aggressive vaccination schedule of any nation in the world, despite not even remotely being the healthiest nation (in fact, the U.S. is currently 50th out of 224 countries for infant mortality rate according to the CIA World Factbook, a number which has been going down).

As you may recall, however, when President Obama signed HR 4310, the 2013 National Defense Authorization Act, on December 29, 2012, it officially made government propaganda “legal” inside the U.S. for the first time since 1948 (if such a thing can actually be legalized in a sane world).

Colorado is one of only 18 states left that allows for parents to file personal belief exemptions to keep their kids from having to take vaccines. At least the bill in question isn’t seeking to completely remove a parent’s right not to get his or her child vaccinated…for now.

With the way things are going in this country, it seems parental rights are being stripped on several fronts. There may be a time when the right to homeschool, and thus to avoid things like vaccines and government propaganda altogether, may be outlawed as well considering our Justice Department’s lawyers have argued that the ability to homeschool should not even legally be considered a fundamental right.