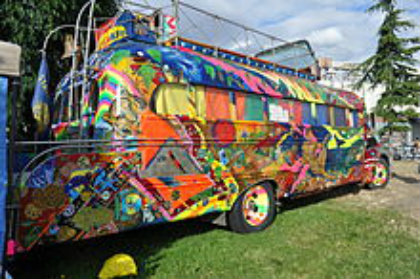 Originally Published at The Daily Coin

It was the early 1980â€²s when the awakening process began for me. A group of friends was celebrating Spring with their annual “Spring Fling”, the first gathering of people that I was able to spend time with who were actually living an alternative lifestyle. At the time, and in some circles today, the “communal lifestyle” was more referred to as the “Counter Culture”. They had awakened to the reality that the “news” was a lie, the politicians were criminals and the “system” was broken. You have to remember the counter-culture really started in the mid 1950â€²s with the “beatniks”, people like Allen Ginsberg, Ram Das, Ken Kesey and Neal Cassady.
These are the people that laid the ground work for what we call today the alternative media; real news. The biggest difference is we have the internet and counterculturist in the 50â€²s and 60â€²s only had print news and word-of-mouth.

I understand the criminal aspect of the time frame referenced has produced the worlds most notorious criminals. The likes of CEO of Goldman Sachs, Lloyd Blankfein, current chief executive of HSBC, Stuart Gulliver, CEO of JPMorgan, Jamie Dimon, operating criminal banking enterprises on a global scale. Drug money laundering, fraud and fractional reserve banking schemes that would make the Cosa Nostra blush or turn green with envy. We already know this, what purpose does it serve to continually re-hash what is known?

Once the drugs wore off and the music settled down, the people began forming communities and making a real effort to network to create a “system” that functions. One of the largest and most notable communities was The Farm located in middle Tennessee. Formed by Stephen Gaskin, an English professor at San Francisco State College, in 1968. Gaskin and several hundred people traveled cross-country to create a community that functioned outside of the debt based, criminal enterprise known as the US dollar.

The question now is, with the size, depth and breadth of the gold/silver community why are we not forming either an online community or a bricks-and-mortar community? If we truly want out of the system and, in our heart-of-hearts, no longer believe in the current debt-based, criminal system, why is Chris Duane the only person talking about forming a community or having a real exit strategy? We have the numbers to support our on community that functions completely outside of the US economic system. In the state of Utah you can use gold and silver as currency and as money. When will we begin using their system instead of the criminal banking systems of Bank of America, Wells Fargo and the like?

What goods or services would you offer and be willing to accept gold or silver as payment? How much gold and silver would you be willing to use as currency? If you are serious about breaking the system, operating outside of the system and leaving a murderous, criminal, liberty and life stealing system behind, these are the questions that should be in the fore-front of every waking moment. They have been for me for several years now and the time has come to begin making a real move away from supporting people that do not support nor care for the well being of me and my family. The only thing the federal government is interested in from me is how much will my family support, with our labor and currency, un-Constituntional wars, drug money laundering banking cartels and indefinite detention for all that oppose their system. Beyond those items, they care not for me or you or anyone else except for the other scum that make up the upper part of the 1% gang. Will you consider breaking away from the system and researching how you can do that? Will you at least look at how the state of Utah functions to determine if their system will work for your business? Will you make any effort at all to get out of the system other than reading articles and “buying” gold and silver? Until we, the gold and silver community, begin making real world efforts to break the system, the criminal elite are laughing all the way to the criminal bank that they own.

We already have several models that could potentially be used as a clearinghouse for the transfer of gold and silver as currency. The model has been built by the state of Utah; Mike Maloney at GoldSilver.com; The Doc at SilverDoctors.com all utilize a system that works for their businesses. Could one of these systems work for your goods or services; your business? Why wouldn’t an online store that offers everyday items, like sugar, eggs, bread, toiletries and all things household, why wouldn’t that scenario work? We have all the pieces, we just need someone to build the actual model that could be implemented at a local level. If implemented at a local level we could see hundreds, if not thousands of new businesses that are employing a great many of our friends, neighbors and family members. When should we start? When do we get serious about saving our families from the recipients of the government largesse?