David Stockman, a former top budget official in the Reagan White House, was charged Monday with overseeing a sweeping fraud at troubled a auto parts supplier he headed before it collapsed into bankruptcy.
Stockman was the former chairman and CEO of Collins & Aikman (CKCRQ), which makes auto parts. 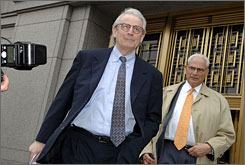 Stockman, 60, was one of four former Collins & Aikman executives named in the indictment unsealed Monday in U.S. District Court in Manhattan. Four other former company employees including a former treasurer have already pleaded guilty in the case, prosecutors said.

The company, based in Southfield, Mich., cooperated in the investigation and was rewarded with a non-prosecution agreement calling for it to continue to help the government, prosecutors said.

The indictment charged Stockman and three others with conspiracy to commit securities fraud, making false statements in annual and quarterly reports, making false entries in books and records, and lying to auditors as well as committing bank fraud, wire fraud and obstruction of an agency proceeding.

The others charged in the indictment were J. Michael Stepp, 62, of Charlotte; David Cosgrove, 48, of Rochester, Mich.; and Paul Barnaba, 37, of Orion, Mich. All three pleaded not guilty and were released on $500,000 bail. They did not immediately comment.

Four others faced charges related to the scandal in separate court papers and had pleaded guilty, prosecutors said.

At a news conference, U.S. Attorney Michael Garcia said Stockman and his co-defendants “resorted to lies, tricks and fraud” to hide the truth about his failing company from investors and creditors.

For Stockman, his personal investments were at risk, Garcia said. “His reputation was on the line as well,” he added.

After he was freed on $1 million bail, Stockman walked out of the courthouse smiling.

“I have done absolutely nothing wrong, except to help save this company from a very dire circumstance,” he told reporters. “All of my actions were motivated by an effort to save the company.”

He said he had personally lost $13 million in the company’s collapse and a business he owned lost $360 million as he tried to rescue the company from a “brutal financial squeeze” by the three big domestic automakers.

“This wasn’t any kind of a joy ride,” he said of his efforts to save Collins & Aikman, which included moving into a motel next to headquarters, working long hours without pay and spending millions of dollars of his own money on company expenses. “This was a disaster.”

He added: “I didn’t line my pockets in any way.”

Stockman’s attorney, Elkan Abramowitz, said the evidence would show there was no looting or phony transactions, only disputes over accounting transactions. “We think this is not a crime,” Abramowitz said.

According to court papers, Stockman responded to a financial crisis at the company in 2005 by directing it to delay paying its bills as long as possible.

Meanwhile, Stockman allowed the company’s employees to mislead creditors about the company’s revenue and the ability of Collins & Aikman to pay its bills, prosecutors said.

The government said Stockman personally decided which of the company’s suppliers and creditors would get paid and personally managed all of C&A’s liquidity during the crisis.

The indictment also accused Stockman of misleading investors, saying he wanted to hide his own and other senior management’s involvement in a fraudulent scheme to skew the company’s accounting to hide its troubles.

Separately, the U.S. Securities and Exchange Commission brought civil charges against Stockman and other individuals, as well as against the company.

If convicted, the defendants could face up to 30 years in prison on the most serious charge.

Stockman was Reagan’s budget director from 1981 to 1985. He created a storm early in his tenure when he told an interviewer that he thought Reaganomics were a “Trojan horse” for the rich, and predicted huge budget deficits. He said later he was summoned to the White House “woodshed” for his comments.

Stockman apologized and kept his job until 1985, when he resigned and wrote a book of scathing criticism of Reagan and his top aides.

Stockman became a private equity investor after leaving government. He joined Collins & Aikman in 2002, soon after Heartland Industrial Partners, a buyout fund that he co-founded in 1999, bought a controlling stake in the company. Stockman and Heartland lost hundreds of millions of dollars when Collins & Aikman sought bankruptcy protection.

Stockman left the company five days before it filed for bankruptcy in 2005. Collins is now reorganizing and has put most of its assets up for sale.

The company was one of the world’s largest auto parts suppliers. Its products included interiors, carpets, acoustics, fabrics and convertible tops.