The U.S. food industry is notorious for poisoning the very consumers who drive their multi-billion dollar enterprise, even spending millions against their right to informed consent (truthful GMO labeling). So, is it any wonder that this deregulated and increasingly deranged juggernaut is experimenting on its own customer base by exposing them to trillions of toxic nanoparticles?

A new study published in Biomedicine and Pharmacotherapy titled, “Effects of titanium dioxide nanoparticles in human gastric epithelial cells in vitro,” reveals for the first time that the nanoparticle form of the common “whitening” agent known as titanium dioxide is capable of inducing “tumor-like” changes in exposed human cells.[1]

Whereas previous cell research has established that titanium dioxide (TiO2) is cytotoxic (cell damaging),[2] this is the first study of its kind to find exposed cells undergo a ‘phenotypal’ transition from normal to cancerous cell traits, including an increased rate of cell proliferation and a decrease in programmed cell death – hallmark features of precancerous and/or cancerous cells associated with ‘immortalization.’

Owing to the fact that the researchers tested human gastric epithelial cells, a type of stomach cell in direct contact with material we eat, and considering the broad range of drug, personal care and food products nanoparticle TiO2 is commonly used within, the toxicological implications of these findings are deeply concerning.

TiO2 is a naturally occurring oxide of titanium, and has a wide range of industrial applications as a “whitening” pigment in plastics, ceramic glazes and paints. It is used in sunscreens as a UV absorbing “sun protection factor,” due to its high refractive index. Most of our risk of exposure comes from its use in toothpaste, drugs and excipient-heavy supplements as a pill coating, and food products, including even milk (to ‘improve’ appearance and texture).

Indeed, given that TiO2 is found in thousands of consumer products, the odds are that you are already being exposed to a significant quantity of them on a daily basis. As reported by Everydayhealth.com, “You ingest around 100 trillion nanoparticles every day, researchers at Binghamton University and Cornell University say.”

So, what are some common brands who use it? Nanotitanium is found in products produced by Jello, NestlÃ©, M&M’s, Mother’s, Mentos, Albertson’s, Hostess and Kool Aid.

Below is a table from the 2012 E Magazine article “Eating Nano” revealing its presence in common U.S. packaged goods. 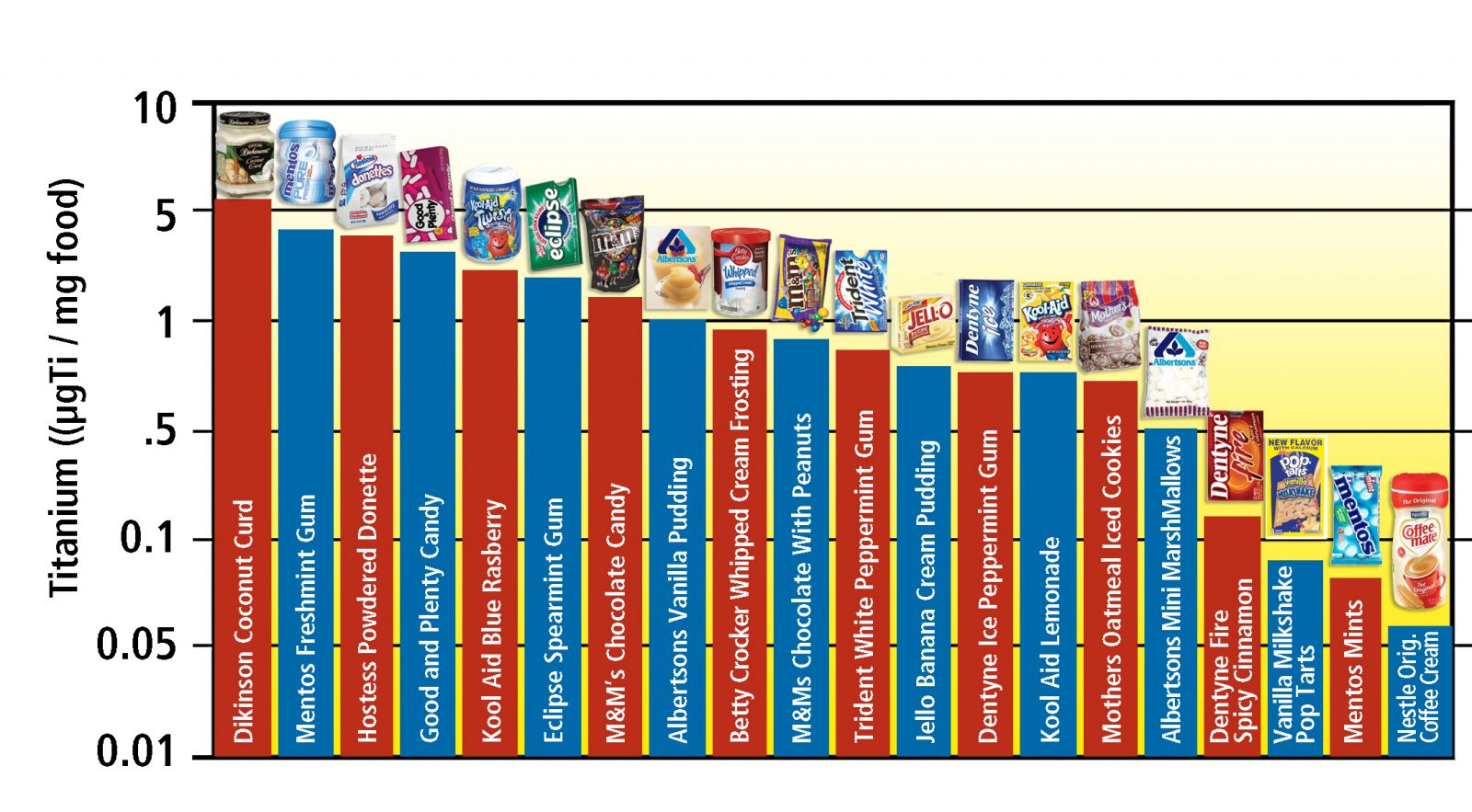 Much like present day radiobiological risk assessments for technologies like mammography were developed long before the discovery of DNA, making it impossible to comprehend their DNA-damaging properties at that time, present day biosafety regulations of TiO2 were determined long before the advent of nanotechnology. In both cases, the true harms of these technologies were — and still are — greatly underestimated.

As a result of this information gap, TiO2is currently classified as ‘generally recognized as safe’ (GRAS) by the FDA, regardless of format. Remarkably, the FDA still allows titanium dioxide in sunscreens “at concentrations of up to 25 percent alone and 2 to 25 percent in combination with any proposed Category I sunscreen active ingredient” without considering the toxicity differential of particle size.[3]Considering that concentrations as low as 0.001% by weight have been found to exhibit clear cytotoxicity within exposed cells,[4] the biosafety regulations governing TiO2 are as great as 5 orders of magnitude or higher less stringent than they should be to protect the consumer.

Nanoparticles are so small they are below the threshold of visibility. This is one reason why they are used for sun protection factor, as 100 nanometers or smaller particles will not leave the white pasty appearance on the skin associated with larger particles. What you can’t see, however, is still there – and in the case of nanotitanium, may slip through the surface layers of our skin into more sensitive tissues, as well as our blood stream. This is also why, if you use sunscreen, you should make sure the ingredients say “non-nanoparticle” when describing titanium dioxide or zinc oxide. And this rule applies to purportedly ‘natural’ brands as well.