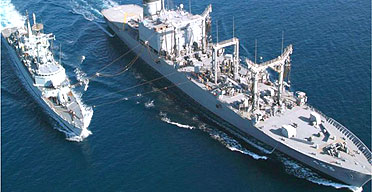 A Pakistani destroyer (l) is refuelled by the Japanese vessel Tokiwa in the Arabian Sea. Photograph: Japan Maritime Self-Defense Force/AP

Japan’s government has ordered its navy to end its mission in support of coalition forces in Afghanistan after failing to win opposition backing to renew the deployment before today’s midnight deadline.

Since 2001, Japan has provided about 126m gallons of fuel to US, British and other vessels operating in the Indian Ocean. The two Japanese ships on duty – the supply ship Tokiwa and the destroyer Kirisame – are expected back home in about three weeks.

Opposition parties, which gained control of the upper house of Japan’s parliament in July, said the mission did not have a UN mandate and possibly violated the country’s pacifist constitution, which severely limits the military’s overseas role.

The prime minister, Yasuko Fukuda, today vowed to pass new legislation that would enable Japan to play a smaller, but symbolically important part in the US-led war on terror.

“To fulfill our responsibility as part of international efforts towards eradicating terrorism, we need to continue our refueling mission,” he said in a statement. “The government will do all it can to pass the special bill for the refueling mission so we can restart our mission as soon as possible.”

Earlier this week, Mr Fukuda failed in a last-ditch attempt to persuade Ichiro Ozawa, who leads the biggest opposition party, to support the mission.

The withdrawal was a blow to US efforts to keep the coalition together. Several senior US officials have publicly urged Mr Ozawa to think again and yesterday the ambassadors of the US, Britain and nine other countries met dozens of Japanese MPs to stress the value of the country’s contribution.

The Australian foreign minister, Alexander Downer, said he was concerned by the withdrawal. “Defeating terrorists is one of the highest security challenges the world faces,” he said. “It is a global challenge and combating terrorism is a collective responsibility.”

But US defence department spokesman Geoff Morrell said the decision would not have “any operational impact whatsoever”. Japan provided about one-fifth of all fuel consumed by coalition ships between December 2001 and February 2003, according to Pentagon data, but only about 7% since then.

Officials in Washington denied that the US defence secretary, Robert Gates, would apply more pressure on Japan when he visits Tokyo next week.

The timing of the visit was “purely coincidental”, a Pentagon official was quoted as telling Japanese reporters in Washington. “I assure you the United States has no intention of injecting itself into that legislative process.”

The issue is expected to be on the agenda, however, when Mr Fukuda meets the US president, George Bush, later this month.