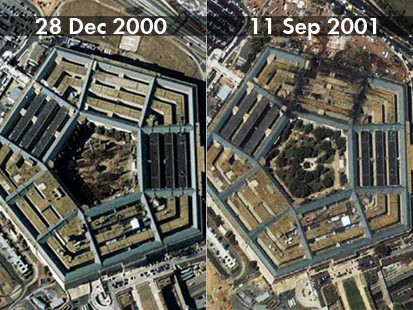 Government satellites have been used in the past to show areas affected by disasters, such as these photos that reveal the changes at the Pentagon after the Sept. 11 attacks. (Space Imaging/Department of Homeland Security)

But now the Department of Homeland Security has developed a new office to use the satellites to secure U.S. borders and protect the country from natural disasters.

The purpose of the National Applications Office is to provide the Department of Homeland Security and civil, state and local emergency planners with imagery and data from satellites run by the National Reconnaissance Office and the National Geospatial Intelligence Agency.

Homeland Security Chief Intelligence Officer Charlie Allen said overhead imagery was used extensively after Hurricanes Katrina and Rita in 2005, and has been used by the Secret Service for security preparations for events such as the Super Bowl.

“Some Homeland Security and law enforcement users also in the past routinely accessed imagery and other technical intelligence directly from the intelligence community, especially in response to national disasters such as hurricanes and forest fires,” Allen said.

Committee members expressed concern about abuse of the satellite imagery, charging that Homeland Security had not informed the oversight committee about the program.

“What’s most disturbing is learning about it from The Wall Street Journal,” said Committee Chairman Rep. Bennie Thompson, D-Miss.

The lawmakers also expressed concern about using military capabilities for U.S. law enforcement and Homeland Security operations, potentially a violation of the Posse Comitatus Act, which bars the military from serving as a law enforcement body within the United States, except where specifically authorized by Congress or the Constitution.

In written testimony, Dan Sutherland, the Homeland Security officer for Civil Rights and Civil Liberties, assured the committee, “We will assist the NAO by keeping a watchful eye on several key civil liberties issues.”

Department of Homeland Security officials said that the National Applications Office would review requests from agencies such as the FBI and the border patrol for the imagery.

“We will not be able to penetrate buildings … there could be some infrared capabilities,” Allen said.

Committee members said that in addition to not being informed about the National Applications Office program, they had not yet been provided with documents defining the limits and legal guidance about the program.

Late Thursday, top Democrats on the committee sent a letter to Homeland Security saying, “We are so concerned that, as the department’s authorizing committee, we are calling for a moratorium on the program.”

Homeland Security Committee Chairman Thompson, along with subcommittee chairs Reps. Jane Harman, D-Calif., and Chris Carney, D-Pa., also wrote, “Today’s testimony made clear that there is effectively no legal framework governing the domestic use of satellite imagery for the various purposes envisioned by the department. … The use of geospatial information from military intelligence satellites may turn out to be a valuable tool in protecting the homeland.”

The committee members have asked that Homeland Security provide the committee with legal documents and the standard operating procedures for the program before they consider the issue further.

Referring to the recent controversy over the potential abuse of the National Security Agency’s warrantless wiretapping program, Rep. Harman said at Thursday’s hearing that the Bush administration “has been making security policy in the executive branch without full regard for the laws that Congress has passed.”

Allen said the National Applications Office would operate “in accordance with the laws.”

“You briefed the appropriators, not the authorizers,” Thompson charged.