In the era of computer-controlled surveillance, your every move could be captured by cameras, whether you’re shopping in the grocery store or driving on the freeway. Proponents say it will keep us safe, but at what cost?

The ferry arrived, the gangway went down and 7-year-old Emma Powell rushed toward the Statue of Liberty. She climbed onto the grass around the star-shaped foundation. She put on a green foam crown with seven protruding rays. Turning so that her body was oriented just like Lady Liberty’s, Emma extended her right arm skyward with an imaginary torch. I snapped a picture. Then I took my niece’s hand, and we went off to buy some pretzels.

Other people were taking pictures, too, and not just the other tourists–Liberty Island, name notwithstanding, is one of the most heavily surveilled places in America. Dozens of cameras record hundreds of hours of video daily, a volume that strains the monitoring capability of guards. The National Park Service has enlisted extra help, and as Emma and I strolled around, we weren’t just being watched by people. We were being watched by machines.

Liberty Island’s video cameras all feed into a computer system. The park doesn’t disclose details, but fully equipped, the system is capable of running software that analyzes the imagery and automatically alerts human overseers to any suspicious events. The software can spot when somebody abandons a bag or backpack. It has the ability to discern between ferryboats, which are allowed to approach the island, and private vessels, which are not. And it can count bodies, detecting if somebody is trying to stay on the island after closing, or assessing when people are grouped too tightly together, which might indicate a fight or gang activity. “A camera with artificial intelligence can be there 24/7, doesn’t need a bathroom break, doesn’t need a lunch break and doesn’t go on vacation,” says Ian Ehrenberg, former vice president of Nice Systems, the program’s developer.

Most Americans would probably welcome such technology at what clearly is a marquee terrorist target. An ABC News/Washington Post poll in July 2007 found that 71 percent of Americans favor increased video surveillance. What people may not realize, however, is that advanced monitoring systems such as the one at the Statue of Liberty are proliferating around the country. High-profile national security efforts make the news–wiretapping phone conversations, Internet moni­toring–but state-of-the-art surveillance is increasingly being used in more every-day settings. By local police and businesses. In banks, schools and stores. There are an estimated 30 million surveillance cameras now deployed in the United States shooting 4 billion hours of footage a week. Americans are being watched, all of us, almost everywhere.

We have arrived at a unique moment in the history of surveillance. The price of both megapixels and gigabytes has plummeted, making it possible to collect a previously unimaginable quantity and quality of data. Advances in processing power and software, meanwhile, are beginning to allow computers to surmount the greatest limitation of traditional surveillance–the ability of eyeballs to effectively observe the activity on dozens of video screens simultaneously. Computers can’t do all the work by themselves, but they can expand the capabilities of humans exponentially.

Security expert Bruce Schneier says that it is naive to think that we can stop these technological advances, especially as they become more affordable and are hard-wired into everyday businesses. (I know of a local pizzeria that warns customers with a posted sign: “Stop stealing the spice shakers! We know who you are, we have 24-hour surveillance!”) But it is also reckless to let the advances proceed without a discussion of safeguards against privacy abuses. “Society is fundamentally changing and we aren’t having a conversation about it,” Schneier says. “We are entering the era of wholesale surveillance.” 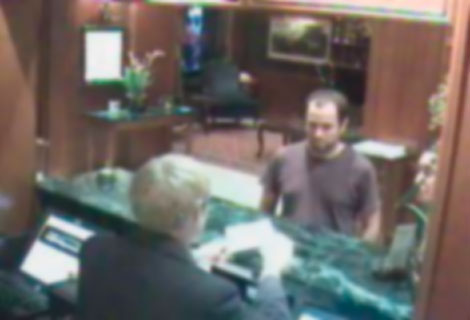 A Face in the Crowd Used by banks, hotels and retail stores, 3VR’s “searchable surveillance” systems automatically create a template of every face that passes in front of security cameras (it caught our author here at a Chicago hotel check-in counter). The system creates a mathematical model based on the geometry of each person’s face that can be compared to a central list of known suspects for instant alerts. The technology can also automatically log events based on an automated object recognition analysis of an entire scene–for example, Frank Jones met with Doris Meeker at 12:45 pm; Meeker arrived in a blue sedan. Because all events are cataloged, several months’ worth of data can be analyzed in minutes.

Earlier this year, on a hot summer afternoon, I left my Brooklyn apartment to do some shoplifting.

I cruised the aisles of the neighborhood grocery store, a Pathmark, tossing items into my cart like a normal shopper would–Frosted Mini-Wheats, Pledge Wipes, a bag of carrots. Then I put them on the belt at checkout. My secret was on the lower level of the cart: a 12-pack of beer, concealed and undetectable. Or so I thought. Midway through checkout the cashier addressed me, no malice in her voice, but no doubt either. “Do you want to ring up that beer?”

My heist had been condoned by Pedro Ramos, Pathmark’s vice president of loss prevention, though he didn’t know precisely when or where I was going to attempt it. The beer was identified by an object-recognition scanner at ankle level–a LaneHawk, manufactured by Evolution Robotics–which prompted the cashier’s question. Overhead, a camera recorded the incident and an alert was triggered in Ramos’s office miles away on Staten Island. He immediately pulled up digital video and later relayed what he saw. “You concealed a 12-pack of Coronas on the bottom of the cart by strategically placing newspaper circulars so as to obstruct the view of the cashier.”

Pathmark uses StoreVision, a powerful video analytic and data-mining system. There are as many as 120 cameras in some stores, and employees with high-level security clearances can log on via the Web and see what any one of them is recording in real time. An executive on vacation in Brussels could spy on the frozen-food aisle in Brooklyn.

In 2006 theft and fraud cost American stores $41.6 billion, an all-time high. Employee theft accounted for nearly half of the total (shoplifting was only a third), so much of the surveillance aims to catch in-house crooks. If the cashier had given me the beer for free–employees often work with an outside accomplice–the system would know by automatically comparing what the video recorded with what the register logged. The technol­ogies employed by Pathmark don’t stop crime but they make a dent; weekly losses are reduced by an average of 15 percent.

Pathmark archives every transaction of every customer, and the grocery chain is hardly alone. Amazon knows what you read; Netflix, your taste in movies. Search engines such as Google and Yahoo retain your queries for months, and can identify searches by IP address–sometimes by individual computer. Many corporations log your every transaction with a stated goal of reducing fraud and improving marketing efforts. Until fairly recently it was impractical to retain all this data. But now the low cost of digital storage–you can get a terabyte hard drive for less than $350–makes nearly limitless archiving possible.

So what’s the problem? “The concern is that information collected for one purpose is used for something entirely different down the road,” says Ari Schwartz, deputy director of the Center for Democracy and Technology, a Washington, D.C., think tank.

This may sound like a privacy wonk’s paranoia. But examples abound. Take E-ZPass. Drivers signed up for the system to speed up toll collection. But 11 states now supply E-ZPass records–when and where a toll was paid, and by whom–in response to court orders in criminal cases. Seven of those states provide information in civil cases such as divorce, proving, for instance, that a husband who claimed he was at a meeting in Pennsylvania was actually heading to his lover’s house in New Jersey. (New York divorce lawyer Jacalyn Barnett has called E-ZPass the “easy way to show you took the offramp to adultery.”)

On a case-by-case basis, the collection of surveillance footage and customer data is usually justifiable and benign. But the totality of information being amassed combined with the relatively fluid flow of that data can be troubling. Corporations often share what they know about customers with government agencies and vice versa. AT&T, for example, is being sued by the Electronic Frontier Foundation, a San Francisco-based civil liberties group, for allowing the National Security Agency almost unlimited access to monitor customers’ e-mails, phone calls and Internet browsing activity.

“We are heading toward a total surveillance society in which your every move, your every transaction, is duly registered and recorded by some computer,” says Jay Stanley, a privacy expert with the American Civil Liberties Union.

Clean Plate Club License-plate readers from companies such as Remington-Elsag use high-intensity infrared cameras that are mounted on the outside of police patrol cars (or even helicopters) or set up in static locations. On patrol cars, the system operates independ-ently while the officer drives, automatically checking plates from up to four lanes of traffic against an on-board “hot list” of wanted vehicles. It uses optical character recognition to differentiate letters and digits from background noise such as images and grime. It reads up to 900 plates per minute from up to 50 ft. away with greater than 95 percent accuracy.

In the late 18th century, English philosopher Jeremy Bentham dreamed up a new type of prison: the panopticon. It would be built so that guards could see all of the prisoners at all times without their knowing they were being watched, creating “the sentiment of an invisible omniscience,” Bentham wrote. America is starting to resemble a giant panopticon, according to surveillance critics like Bob Barr, a former Republican congressman from Georgia. “Were Bentham alive today, he probably would be the most sought-after consultant on the planet,” he recently wrote in a Washington Times op-ed.

One of the most popular new technologies in law enforcement is the license-plate reader, or LPR. The leading manufacturer is Remington-Elsag, based in Madison, N.C. Its Mobile Plate Hunter 900 consists of cameras mounted on the outside of a squad car and connected to a computer database in the vehicle. The plate hunter employs optical-character-recognition technology originally developed for high-speed mail sorting. LPRs automate the process of “running a plate” to check if a vehicle is stolen or if the driver has any outstanding warrants. The sensors work whether the police car is parked or doing 75 mph. An officer working the old-fashioned way might check a couple dozen plates a shift. The LPR can check 10,000.

New York’s Long Beach Police Department is one of more than 200 agencies around the country that use LPRs, and I rode in a squad car with Sgt. Bill Dodge to see the technology at work. A computer screen mounted in front of the glovebox flashed black-and-white images of every photographed plate; low alarms, like the sounds of your character dying in an ’80s video game, droned for the problem cars. Over the course of a couple of hours we didn’t net any car thieves or kidnappers, but Dodge’s LPR identified dozens of cars with suspended or revoked registrations. He said that the system doesn’t violate anyone’s privacy–”there’s no magic technology that lets it see inside a garage”–and praised its fairness. “It doesn’t matter if you’re black, white, old, young, a man or a woman, the system cannot discriminate. It looks at everyone and everything.”