Microsoft has come over all PC – gedddit?!?!? – by filing a patent application for technology that’ll stop you from swearing online.

In its “Automatic censorship of audio data for broadcast” patent application, the firm describes how a real-time or batch-mode automatic censor could be employed to filter out “undesired words or phrases”. 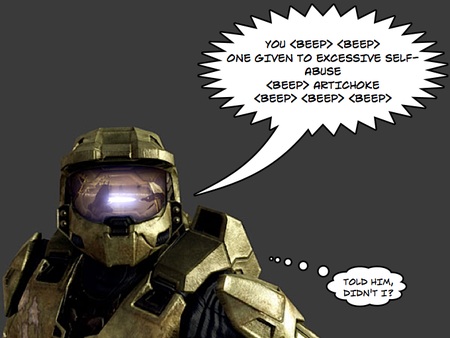 Exactly which products could make use of Microsoft’s PC-tech hasn’t been mentioned, but it’s reasonable to assume that Xbox Live could be one of the software giant’s primary targets.

Microsoft stated that if, say, a gamer’s words are likely to match those listed in its library of undesirable speech, the input audio data stream will be altered so that the offending word or phrase is made “unintelligible or inaudible”. The application also mentions automatic replacement of undesired words with acceptable words or phrases.

Based on the description, it sounds like the technology will either change your portrayal of a rival gamer as a ‘d**k-faced, motherf***er’ to a ‘Richard, who was nice to his mum’, or just bleep it out altogether.

Unfortunately, Microsoft hasn’t listed a top ten of its most offensive words. But ‘red’, ‘ring’, ‘of’ and ‘death’ must be quite high up the list.