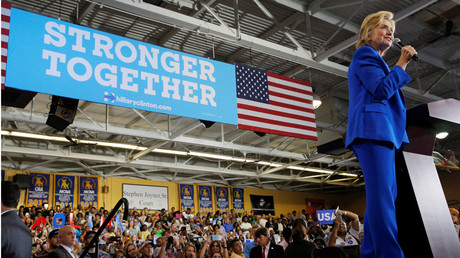 A complaint has been filed with the Federal Election Commission over the alleged violation of campaign finance laws by Hillary Clinton’s campaign and the Democratic National Committee.

The complaint comes as undercover videos from the conservative Project Veritas allegedly show both the campaign and the DNC involved in ripping up voter registrations and unethical campaigning.

According to the complaint, it’s based on “findings from an investigation conducted by Project Veritas Action and their published reports regarding the same, as well as on news sources.”

In the videos, an undercover operative tells campaign coordinator Trevor Lafauchi he ripped up three ballots (voter registrations) who registered for Trump and asked if he would report it. Lafauchi says he won’t, and as long as he doesn’t make it a habit.

“You can prove conspiracy if there’s a bus,” Foval says at another point, potentially referring to voter fraud. “If there are cars it’s much harder to prove.”

The Public Interest Legal Foundation (PILF), a right-wing group that litigates to protect election integrity, filed the complaint on Tuesday.

“This complaint is based on information and belief that respondents have engaged in public communications, campaign activity, targeted voter registration drives, and other targeted GOTV [get out the vote] activity under 11 C.F.R. 100.26 and 11 C.F.R. 114.4 at the request, direction, and approval of the Hillary for America campaign committee and the Democratic National Committee in violation of 11 C.F.R. 109.20 and 11 C.F.R. 114.4(d)(2) and (3),” the complaint reads.

“Respondents Hillary for America, the Democratic National Committee, Democracy Partners, Americans United for Change, and their agents, named and unnamed above, have, each of them, individually and collectively, violated the Federal Election Campaign Act of 1971, as amended, and must be held accountable and liable for their unlawful actions.”

WikiLeaks’ recent release of emails from Clinton campaign chair John Podesta also points to potential campaign finance violations. A condition of the 2010 Citizens United Supreme Court ruling that allows Super PACS to accept unlimited private donations is that they do not communicate directly with presidential campaigns. The emails show the Clinton campaign was in communication with Super PACS including Correct the Record and Priorities USA.

DNC chair Donna Brazile responded to the Project Veritas videos, saying the DNC was conducting an internal investigation. “We do not believe, or have any evidence to suggest, that the activities articulated in the video actually occurred,” Brazile said. “The discredited source of these videos, James O’Keefe, is a convicted criminal with a history of doctoring video to advance his ideological agenda.”

Project Veritas is run by conservative O’Keefe. Since setting up a “social welfare” arm, the organization enjoys 501c4 benefits granted in the Citizens United ruling, meaning it is exempt from paying tax.