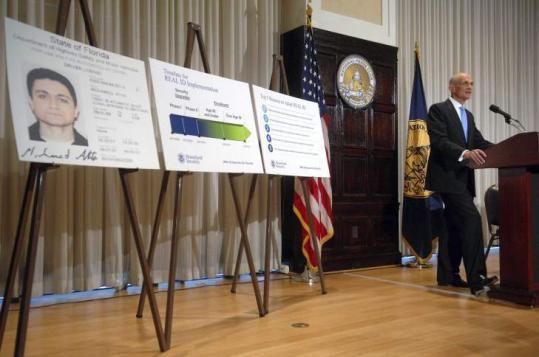 The critics said the new licenses expected under the plan, which is aimed at screening out potential terrorists and uncovering illegal immigrants, could still be forged.

They also complained that the program, known as Real ID, would be costly for states to implement, potentially restrict summer travel and access to federal buildings, and allow private companies access to the personal data of most US citizens.

But they also welcomed yesterday’s official announcement that states have until May 2011 before they need to begin issuing licenses that meet the department’s new guidelines, and until December 2014 to begin replacing current licenses. Drivers over age 50 will not have to obtain new licenses until the end of 2017.

The deadline extensions give both Congress and future presidents time to reconsider what opponents have depicted as a national identification system that will infringe on privacy rights and leave room for large-scale identity theft. The 2005 law required states to collect and store additional data on driver’s license applicants, such as birth certificates, Social Security numbers, and home addresses.

So far, 17 states have passed legislation or resolutions objecting to the Real ID Act’s provisions, many due to concerns it will cost them too much to comply. The 17, according to the ACLU, are Arkansas, Colorado, Georgia, Hawaii, Idaho, Illinois, Maine, Missouri, Montana, Nebraska, Nevada, New Hampshire, North Dakota, Oklahoma, South Carolina, Tennessee, and Washington state.

Massachusetts has been granted an extension until 2010 to decide whether the state will comply with the new law, according to Juliette Kayyem, the state’s undersecretary for homeland security.

“There is nothing that happened today, or that will happen tomorrow, that will change Massachusetts’ citizens drivers licenses,” she said. “We have plenty of time to assess the impact of the new regulations and whether we will ultimately comply. Our hope is that after November the new leadership in Washington – whoever it is – will take another look at this.”

Under Real ID, all new licenses would be machine-readable and contain personal information that could be scanned by governments and potentially by corporations.

At a news conference yesterday, Homeland Security Secretary Michael Chertoff said the guidelines represent a balance between security and privacy in accordance with the Real ID Act.

He warned that residents in states such as Georgia and Washington, which have refused to comply with the program, may be subject to additional security checks or prevented from boarding flights once the program begins this spring.

He urged those states to seek waivers to allow their residents to continue flying as of May 11, when the regulations begin to take effect.

The ACLU called Chertoff’s warning an empty threat designed to pressure states to join the program.

“The airline industry is not going to allow the federal government to prevent citizens of noncompliant states from getting on airplanes,” said Timothy Sparapani, the group’s senior legislative counsel.

The Travel Industry Association of America welcomed “flexibility” from DHS on the program’s implementation schedule but said “no American should be denied the right to travel because of disagreements between federal and state lawmakers.”

State and local officials also expressed concerns. In a joint statement, the National Governors Association, the National Conference of State Legislatures and the American Association of Motor Vehicle Administrators said they need time “to determine whether the act can be implemented in a cost-effective and feasible manner.”

DHS estimated that the program will cost states $3.9 billion to implement, a significant decrease from earlier estimates as high as $14 billion. But many state officials have said the financial burden is still too great.

Senator Olympia Snowe, Republican of Maine, whose state is among those resisting the program, said it is “unrealistic to expect our state to conform” when “the federal government has only provided a mere 3 percent of the funds needed for implementation.”