By Alan Travis | Gordon Brown’s decision to overturn the advice of his own group of drug experts by pressing ahead with a tougher policy on cannabis could face a high court challenge from campaigners.

As the report from the 23-strong Advisory Council on the Misuse of Drugs (ACMD) recommending that cannabis should remain a class C drug was delivered yesterday to the home secretary, Jacqui Smith, it was widely reported that Gordon Brown would ignore its findings.

“Whitehall sources” were reported as indicating that the prime minister would formally respond to their report after the local elections next week.

“Mr Brown has made clear that, notwithstanding the scientific evidence, there are other considerations,” a Whitehall source was quoted as saying. 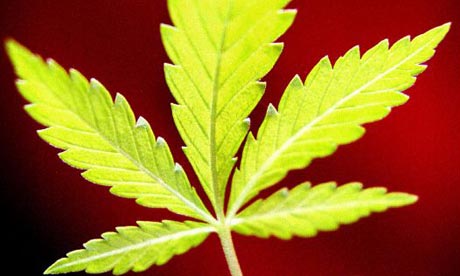 “These include expressing concern about the involvement of serious crime in the cannabis trade and sending a signal, as a government and as a society, that this drug is a danger to health.”

This is not the first time the prime minister has let his intentions be known over the issue of cannabis. When the home secretary asked the council to examine the legal status of cannabis for the third time in recent years, Smith had to write to the committee assuring its chairman, Sir Michael Rawlins, that ministers did not intend to pre-empt its findings.

The Misuse of Drugs Act 1971, which established the current framework for controlling illegal drugs in Britain, placed a legal obligation on ministers to consult the ACMD before they make any changes under the legislation.

ACMD sources indicated yesterday that while council resignations are unlikely if Brown ignores their advice, it was possible that a legal challenge could be mounted by others. For a high court challenge to succeed, it would have to demonstrate that ministers took the decision without fully considering the ACMD’s report. The repeated Downing Street briefings on Brown’s intentions could be expected to feature strongly in any such case.

At stake is the treatment handed out by the police to more than 100,000 people a year found in possession of cannabis. Reported use has gone down since the drug was downgraded to class C by David Blunkett when he was home secretary in January 2004, and the police have had the power to confiscate the drug and issue an on-the-spot warning.

Last year police warnings on cannabis had soared by 20% to 120,000 a year, bringing many more cannabis users within the scope of police enforcement action. A decision to regrade the drug could actually backfire by leading to fewer users facing police action, as a decision to arrest them will be more time consuming.

A decision to return cannabis to class B will again make possession an arrestable offence, which will mean the offender would be taken to the police station and could face prosecution with the possibility of a prison sentence in a few cases.

The ACMD held an unprecedented three-day meeting in February to consider concerns about links between the growing potency of the drug available on the streets and its potential mental health effects. The experts heard evidence that 85% of what is available on the streets is herbal cannabis – two to three times stronger than the previously ubiquitous imported Moroccan cannabis resin.

But they were also told that the incidence of new schizophrenia cases reported to GPs had gone down, not up, between 1998 and 2005, indicating a weak link between increased use and potency in the past two decades and mental health problems. Some papers suggested that users are simply moderating their use of the higher potency cannabis.

Chris Huhne of the Liberal Democrats said the government should stop playing politics and publish the ACMD report as soon as possible. But the Conservatives back Brown, saying reclassification would not come a moment to soon.