Yulia Skripal, daughter of ex-Russian double agent Sergei Skripal, is no longer in a critical condition after she and her father were attacked with a deadly nerve agent. She is understood to be “improving rapidly.”

Four weeks after the Salisbury poisoning, Yulia’s condition appears to be finally improving. The good news comes only one day after detectives revealed to the public that the Skripals appear to have been attacked in their own home, as the highest concentration of chemicals was found by experts on the front door of their house on Christie Miller Road.

“At this point in our investigation, we believe the Skripals first came into contact with the nerve agent from their front door,” he said. “We are therefore focusing much of our efforts in and around their address.

“Those living in the Skripals’ neighborhood can expect to see officers carrying out searches as part of this, but I want to reassure them that the risk remains low and our searches are precautionary. 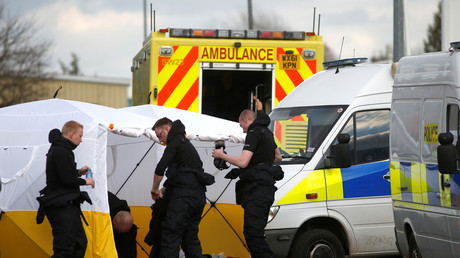 “I’d also like to thank the local community for their continued support and understanding. The unique circumstances of this investigation means that officers are likely be in the area for several weeks and months.”

Around 250 counter-terrorism detectives will continue to work around the clock on the investigation into the March 4 attack with a crack team of experts, police, and other partners to help them trawl through more than 5,000 hours of CCTV and examine over 1,350 exhibits that have been seized. Police will continue to sift through around 500 witnesses who have been identified so far, and the hundreds of statements taken in the investigation.

The UK government has pointed the finger at Russia over the attack on the Skripals. Moscow has repeatedly denied responsibility and issued a statement on Wednesday, claiming that the British authorities are “not interested in identifying the true perpetrators and motives of the crime,” which it has called a “massive political provocation.”

There has been no update on Sergei Skripal’s condition, but according to recent court documents, it is understood that he is unresponsive.